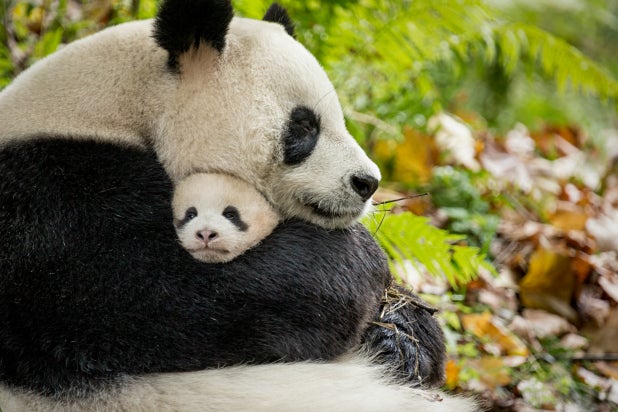 Another April, another Disneynature release, and we’ve now seen enough of these films to pretty much know what to expect:

The cinematography will be gorgeous, featuring lots of breathtaking time-lapse footage of clouds rolling over the savannah or the tundra or wherever; over-adorable narration, in which an A-list actor bestows human names upon the wild-animal “characters” and waxes effusive over a mother’s love in the wild; and a sanitized, Disney-fied version of nature in which apex predators usually have their dinner just out of camera range.

“Born in China” doesn’t flip the script in any significant way, but while the storytelling here has significant weaknesses, it’s hard to stay mad at any movie that offers so many close-ups of an insanely adorable baby panda.

The voice-over from John Krasinski tells us that that baby panda is Mei Mei, who spends the first year of her life being hovered over and obsessively tended to by Ya Ya, whom the script (by David Fowler, Brian Leith, Phil Chapman and director Chuan Lu) refers to as a “helicopter mom.” Mei Mei is a scene-stealer, so it’s always a little disappointing when the film cuts away to other creatures in other parts of the country.

We also meet golden snub-nosed monkey Tao Tao, whose lack of maternal focus has led him to run wild with his peers; snow leopard Dawa, feeding her young offspring and keeping them safe from predators and other leopards who would usurp their territory; and a group of female chiru (Tibetan antelopes) who leave the men behind every spring so they can give birth. (The G-rated “Born in China” is very matter-of-fact about showing baby chiru sliding right out of mommy; it’s a little more skittish about showing Dawa making a meal of a sheep.)

While previous Disneynature titles (“Bears,” “African Cats,” “Monkey Kingdom,” “Chimpanzee”) have offered fairly contrived storylines, heavy on the anthropomorphism — they also told a full story (usually a year in the life) of the animals it featured. “Born in China” hops back and forth so much from species to species that it never quite hits its dramatic stride.

China offers a vast array of geographical terrain — and through sheer coincidence, it happens to have one of the world’s largest moviegoing audiences. But the fact that these very different animals all happen to live in the same country isn’t enough of a narrative thread to weave these disparate tales together.

The closing credits show us the animals that didn’t end up getting star billing in the film (wolves and cranes among them). It also offers the sight of the long-suffering camera crews, mucking about in swamps or buried in snowdrifts just to get the perfect shot. Lu and his crew do certainly capture extraordinary footage, and the Disneynature movies make an effective gateway for young children to become interested both in documentaries (they can watch the more brutal stuff when they’re older) and the environment itself.

And in an era in which we have an administration seemingly unconcerned with the gutting of the planet and of the species that live upon it, it’s never too early to remind kids of the fragility and majesty of life on Earth’s every corner.