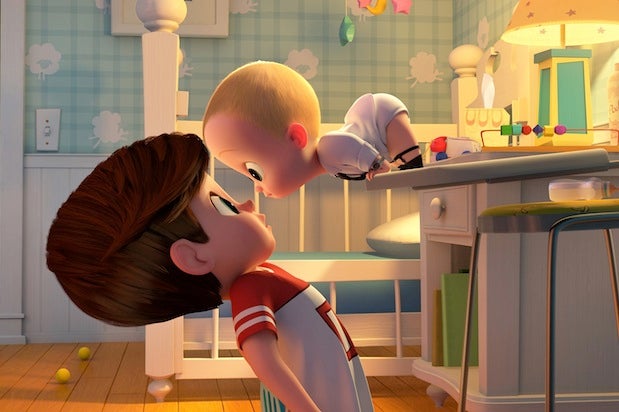 Fox/DreamWorks Animation’s “The Boss Baby” has become a surprise No. 1 success at the box office, riding robust advance ticket sales to claim the top spot from “Beauty and the Beast” with a $15.5 million opening Friday from 3,773 screens.

That strong opening has drastically pushed opening weekend estimates to the low 50s for the Alec Baldwin-fronted family film. A total in that range would put it in the same neighborhood as the $52.1 million opening enjoyed by DreamWorks’ “Home” in the same release date spot back in 2015. It also smashes the projections set by trackers earlier this week, who had the film making around $33 million.

Fox and DWA ran a hard marketing campaign to get the “Boss Baby” to stand out in a competitive March at the cinemas. The centerpiece of its marketing was a custom-made trailer screened for moviegoers who went to see “Beauty and the Beast” in its opening two weeks ago.

The trailer featured Alec Baldwin’s character playing with toys resembling Lumiere and Cogsworth from the Disney classic before making a sales pitch on his new movie to the audience. “We don’t have any talking candlesticks, but if that’s a deal breaker, we’ll cram one in there,” Baldwin jokes.

Advertising directly to Disney’s enormous audience has paid off, as “Boss Baby” became Fandango’s No. 1 ticket-seller on Friday, setting the stage for a strong finish to Fox and DWA’s distribution partnership.

Also Read: 'The Boss Baby' Review: Wit and Charm Gets Sunk in Too Much Formula

“The Boss Baby” stars Baldwin as a suit-and-tie-wearing infant who is dropped into a family. Tom McGrath directed the movie, which also stars Miles Christopher Bakshi, Steve Buscemi, Jimmy Kimmel, Lisa Kudrow and Tobey Maguire. Though it received a mixed 48 percent on Rotten Tomatoes, the film passed the audience test with an A- on CinemaScore.

The outlook was far less rosy for Paramount’s “Ghost in the Shell,” which made just $7.7 million from 3,440 screens and is now expected to come in a distant third with a $20 million weekend. The remake of Mamoru Oshii’s 1995 anime film will now look to international markets to make back its reported $110 million budget.

“Ghost in the Shell” stars Scarlett Johansson as The Major, an agent with an android body and a human mind that leads the counter-terrorism unit Section 9. Takeshi Kitano, Michael Carmen Pitt, Pilou Asbæk, Chin Han and Juliette Binoche also star.

The film has been embroiled in controversy for months due to Johansson’s casting in the lead role, who was originally Japanese. Johansson and Oshii defended the casting, saying that The Major’s body is a cyborg shell, making her, in the words of Johansson, “identity-less.”

That defense didn’t convince the Media Action Network for Asian Americans, who said that Johansson was “lying” when she said she would never play a character of another ethnicity. “Ghost in the Shell” has also faced a weak reception from critics and audiences, receiving a 41 percent RT rating and a B from CinemaScore.