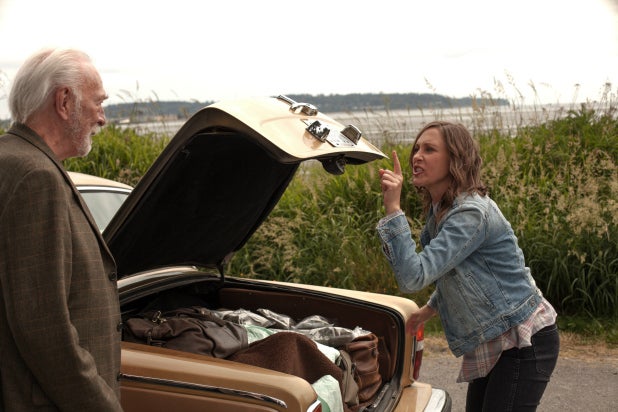 “Boundaries” opens with the kind of percolatingly funny character peek that gives you hope for the journey ahead. Writer-director Shana Feste, her camera trained on Vera Farmiga’s face during a therapy session focused on her character Laura, allows you to watch an open-hearted, well-meaning woman trying to assert herself, yet all too easily revealing just how uphill this particular challenge is.

The cracks in the armor come in Farmiga’s amusing little bursts of defensiveness, until the last disappointment: a professional voice offscreen gently pointing out how the rescue dog in Laura’s bag violates the limits previously set for her excessive adopting. It ends the scene with that sweet spot for any comedy that strives at all to feel human: frailty, goodness, and humiliation in equal measure.

Laura’s biggest self-help concern, as she struggles with relationships and raising a bullied misfit of a teenager (Lewis MacDougall, “A Monster Calls”), is processing how to set parameters regarding her unreliable father Jack (Christopher Plummer), a weaselly figure whose calls to Laura show up on her smartphone as “Don’t Pick Up!” And when dad finally gets one of those calls answered, which pushes a reluctant Laura back into his life, we sense something potentially achy-funny in two gifted actors butting heads over past grudges and new hiccups.

Watch Video: 'All the Money in the World': Christopher Plummer Didn't Think He'd Be Able to Pull Off Replacement Role (Exclusive)

Would that the rest of “Boundaries” carried that initial mom-in-the-headlights scene’s undiluted, appealingly revelatory approach to character-based humor. Instead, Feste sets this dispiritingly accommodating, maladroit woman on a fairly cardboard-cut journey of psychological breakthroughs about her nogoodnik pops via that overused forced-closeness device: the road trip. One wishes Feste, whose spotty track record includes the sturm-und-twang drama “Country Strong” and the excoriated remake of “Endless Love,” had checked to see if there was any gas left in the tank of this genre before committing to its well-worn byways.

It’s a shame, since Feste has supposedly taken a page from her own life as inspiration for “Boundaries,” the press notes pointing to the writer-director’s own friendly-furious relationship with a ne’er-do-well dad as the source material. Why, then, does Jack leap off the screen, while Laura recedes into patsy-hood? Farmiga’s no slouch in the layered-wreck department, but the ease with which Laura falls for Jack’s shenanigans make for a magnetism imbalance from which the movie never quite recovers.

A pair of expulsions trigger the initially-Seattle-set story: her son Henry’s from high school (for another of the budding artist’s favorite getting-to-know-you renderings, the pornographic portrait) and Jack’s from his senior-living facility for unexplained offenses. For Laura, it’s an opportunity to fuse stress (Jack) and opportunity (finding a good private school to foster Henry’s talent) into a deal with her father: help pay for Henry’s tuition, and she’ll nip his homelessness in the bud by driving him down to Los Angeles, where Jack’s other daughter Jojo (an expectedly nutty Kristen Schaal) is eager for extended daddy time.

The problem is that Feste, through Jack, sets up Laura to be an unwitting sap; Jack agrees to the arrangement because it’s a golden opportunity to secretly sell the marijuana he’s been growing, first to a hippie art-forger pal (Christopher Lloyd) during an overnight stay, then, in a move sold as a sentimental request from Henry to see his absentee dad, to Laura’s wastrel of an ex (Bobby Cannavale).

With every male in the movie in on a deception that you know, once discovered, will jeopardize Laura’s emotional health and possibly her freedom, “Boundaries” quickly loses its friskiness and begins to feel like a cruel prank on a well-meaning, if not exactly well-reasoned, soul. (Even the fact that there are rescue dogs in tow on this trip feels like little comfort for Laura.)

That was surely not Feste’s intention — the vibe is vinegary but kooky/sentimental — yet there’s also little that veers off the beaten path in terms of the cutting humor, the misadventure stuff, or the inevitable ticker-tugging. When Peter Fonda shows up as a well-off retired dealer pal of Jack’s, “Boundaries” makes steps toward giving a pair of screen legends a shot at unforced charisma, but the scene is quickly dampened by a dumb bit.

By the end, people say things intended to bring resolution, including Laura’s expectedly cathartic telling off of her piece-of-work rich-woman boss by long distance. But so much of “Boundaries” coasts on hackneyed complications and characters’ self-defeating actions that one wonders why we should believe anything anybody says. (What was delusional but funny about that first therapy scene has by now become suspiciously story-beat sincere.)

Plummer, of course, invests Jack with rascally, impatient life that actors half his age — and he’s 88 — would kill to emit so gracefully. But his character probably belongs in a retirement home heist movie, not the regrettably low-boil misfits-seeing-each-other heartwarmer that Feste believes in as blindly as Laura does her dad’s ability to not disappoint.