It wasn’t that hard out there for a wimp.

Fox’s live-action adaptation of Jeff Kinney’s “Diary of a Wimpy Kid” book series opened to $21.8 million in U.S. and Canada, according to studio estimates.

That’s a very strong start, given that producer Nina Jacobson’s first film since leaving Disney, made for $19 million, was optimistically projected by Fox to open to about $7 million less than that.

“Honestly, with ‘Alice’ still sitting there, I didn’t know this kind of opening was possible,” said Fox executive VP of distribution Chris Aronson. “I thought it would be good if we could hit the mid teens.” 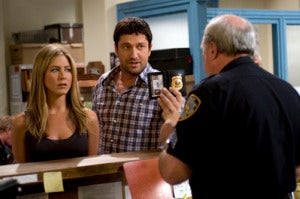 Certainly, the other PG-rated kiddie-book-adaptation currently in the market provided some competition.

For the third straight weekend, the domestic box office belonged to Disney’s 3D “Alice in Wonderland,” which dropped only 44 percent to finish with $34.5 million. With $47 million in international receipts over the weekend, the film is now director Tim Burton’s all-time top grosser with $565.8 million, beating out “Charlie and the Chocolate Factory.”

In third place, Sony romantic comedy “The Bounty Hunter” also opened decently, grossing $21 million over the three days. Shot on budget of around $40 million, that was on the high end of pre-release expectations for the PG-13-rated movie, which pairs Gerard Butler and Jennifer Aniston.

Also opening wide this weekend amid an overall box office that was 22 percent above the same weekend last year, according to one studio’s estimate, Universal’s futuristic sci-fi thriller “Repo Men” got off to a bleak $6.2 million start. 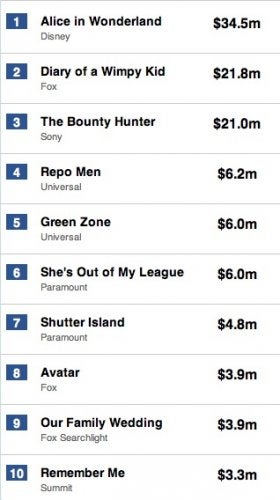 The R-rated movie, co-financed by Relativity Media at a cost of $32 million, and themed around people who can’t pay for their organ donations getting whacked, wasn’t picked to get off to a huge start.

“The only time I’ve ever seen body-part-swapping handled deftly in a movie was in ‘Monty Python’s The Meaning of Life,’” quipped one rival-studio executive.

That "Repo Men" was directed by a rookie, Miguel Sapochnik, and had been on the shelves for nearly three years didn’t buoy pre-release forecasts, either. Still, Universal was hoping for at least a start in the low double-digits.

With speculation now focused on how much the project will lose, the movie dropped 58 percent in North America this weekend to $6 million, while international gross within 23 territories reached $7.4 million. That brings “Green Zone’s” two-week global take to just over $45 million.

Among films starting out in limited release, Apparition’s “The Runaways,” starring “Twilight’s” Kristen Stewart, took in $803,000 at 244 locations.

Acquired for distribution in English-speaking territories for $350,000, the Tribeca Audience Award winner took in $35,000 opening at two U.S. theaters.

All said and done, however, the story at the weekend box office remained “Diary of a Wimpy Kid,” which was shot in British Columbia by Thor Freudenthal (“Hotel for Dogs”) using a cast of largely unknown teen and pre-teen actors.

According to Aronson, sequel talk had already begun prior to the film’s opening.

“When you’re dealing with a fan-based property that’s made for that kind of economical number, it makes it easier to start developing the next one,” he said.

For its part, Fox is still watching the meter run on “Avatar,” which declined only 40 percent this weekend to $3.9 million. The film is still in the top 10 domestically, having grossed $736.9 million in the U.S. and Candada to date.

However, with Paramount/DreamWorks’ “How to Train Your Dragon” opening in 3D next weekend, Warner’s “Clash of the Titans” coming the weekend after that, and “Alice” still very much alive, “Avatar’s” 3D run looks to be finally coming to an end, despite the fact that the James Cameron movie seems to have more in the tank.