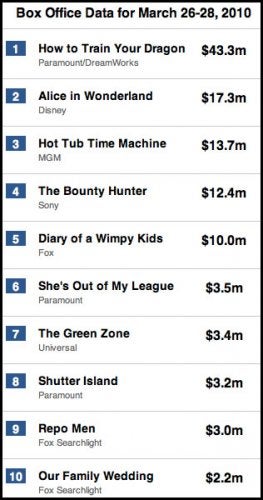 Kicking off an epic clash of big 3D films at the box office, DreamWorks Animation’s "How to Train Your Dragon" entrenched itself on the high ground this weekend, opening to $43.3 million in the U.S. and Canada, according to studio estimates.

Based on the openings of other 3D films recently, it’s not a spectacular number for a film that cost $165 million to make. But the Paramount-distributed film’s extraoridinary reviews (97 percent fresh on Rotten Tomatoes) and word of mouth ("A" CinemaScore grade) will give it the inside track to the finite number of 3D screens over ongoing spring break period.

"The movie doesn’t fall into a predictable box," said Anne Globe, head of worldwide marketing and consumer products for DreamWorks Animation, conceding that tracking for "Dragon" wasn’t strong in the weeks leading up to its release. "But we have the best reviews for any movie this year, and we have an A CinemaScore, so we anticipate some really strong play over the coming spring break period."

"I think the legs on this are going to be very strong," added IMAX president Greg Foster, whose chain is running "Dragon" on 185 screens through May. The film’s IMAX 3D gross came in at $5 million, accounting for 11 percent of its overall nut. (For "Alice in Wonderland’s" opening three weeks ago, that figure was 10.5 percent.)

Grossing $17.3 million, Disney’s "Alice" finished in second place at an overall domestic box office that was off 13 percent from the $141 million total grossed over the same end-of-March weekend last year.

It was the first time two 3D films finished first and second at the box office, but don’t ask Disney officials to raise glass in toast. 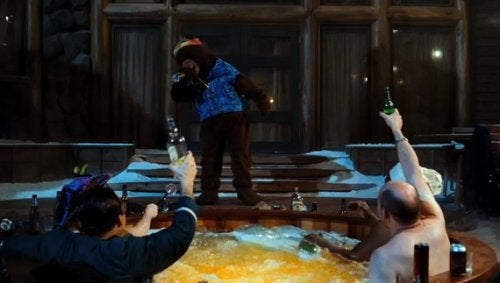 "Alice" had plenty of momentum entering its fourth weekend in theaters, but was forced to give up much of its 3D play when "Dragon" booked 2,178 3D locations and 4,055 overall. Even with its screen count dropping significantly, "Alice" declined only 48 percent week-to-week, and has now grossed $656 million worldwide, with foreign markets yielding $46 million this weekend.

"It’s on the low side of what we were hoping for, but people really like this movie, and maybe it will do some solid business over the coming Easter break," said Erik Lomis, president of worldwide theatrical and home entertainment distribution and acquisitions for MGM.

An ensemble comedy led by John Cusack, the offbeat "Time Machine" is priced out of the low-budget realm at $35 million. Howevcer, making money on the film isn’t a concern, according to MGM officials, who are hoping for a bit more than just breaking even.

Overall, the film garnered a B CinemaScore grade, but an 85 percent "definite recommend" among males 18-24 has MGM brass hopeful that the college-age audience, out of school for the next couple of weeks, will gravitate to the movie.

Finishing in fourth place, Sony’s romantic comedy "The Bounty Hunter" declined only about 40 percent in its second weekend with $12.4 million. Shot for $40 million and starring Gerard Butler and Jennifer Aniston, the movie’s domestic gross stands at $38.8 million.

While "Dragon" and "Alice" struggled to find a way to share a 3D exhibition market that’s currently limited to fewer than 2,500 format-equipped locations, the real battle is coming up next weekend, when Warner’s 3D-converted "Clash of the Titans" premieres.

"It’s going to be a bloodbath," noted one exhibition official.

Solidifying commitments of at least two weeks for all its engagements, and having established some momentum this weekend, "Dragon" would seem to have the upper hand, with Disney and Warner left to fight for the 3D screens that are left over.

"You’re going to have theaters that have four 3D screens, and ‘Dragon’ will get two of them," said the exhibition official.

Money will certainly be left on the table for at least two distributors.

On Saturday, at the Grove Pacific Theaters in Los Angeles, for example, three mid- to late-afternoon engagements for "How to Train Your Dragon" were busy, but there was room in the front rows, while a single screen showing "Alice" was completely sold out.