Universal’s $110 million remake of "The Wolfman" finished third with a four-day gross of $36.5 million, slightly above predictions of about $34 million going into the weekend.

Acccording to one studio’s figures, the four-day President’s/Valentine’s Day weekend yielded all North American movie distributors about $235 million, up 9 percent over last year’s record $216 million haul. "Valentine’s Day," a $52 million film directed by Gary Marshall and featuring a star-studded roster of brief appearances, beat out 2007’s "Ghost Rider" ($45.4 million) as the top all-time performer for this pivotal week end on the February calendar.

"You had three new pictures come in for three different audiences, and all of them connected," noted Fox executive VP of distribution Chris Aronson.

In its ninth weekend of release, Fox 3D phenom "Avatar" added another $30 million to cumulative totals that have now surpassed $660 million domestically and $2.3 billion worldwide.

Sony’s "Dear John" — last week’s box-office champ — grossed $18.8 million over the four days, bringing its two-week total to above $56 million. The film was fully financed by Relativity Media for a reported $25 million.

Here’s how the top 10 shaped up over the four-day President’s Day holiday:

But more than halfway through the weekend, moviegoer love is finding a way to make it all work, with each of the new films outperforming pre-release revenue expectations or matching them, while leading the North American box office to what’s shaping up to be an President’s Day weekend record.

On top is Warner/New Line’s star-studded romantic-comedy ensembler “Valentine’s Day,” which grossed $18.4 million on Saturday and is pacing to finish the four-day holiday-weekend period with about $62 million. 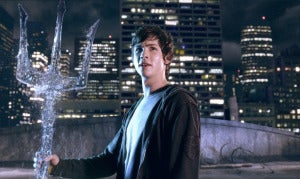 “New Line put together a terrific cast and a good concept, and while the reviews weren’t stellar, the audience response has been great,” said Warner distribution president Dan Fellman.

Also outperforming forecasts is Fox’s PG-rated Chris Columbus fantasy film “Percy Jackson and the Olympians: The Lightning Thief,” which added $11.5 million Saturday and is pacing to finish past $40 million for the four days.

“Every tracking service had us in the high twenties,” noted Fox executive VP of distribution Chris Aronson, “But to be in position to hit $40 million is sensational.”

Opening in more than 3,000 theaters as well, Universal’s remake of “The Wolfman” starring Benicio Del Torro, Anthony Hopkins and Emily Blunt is right around forecast, actually growing its audience 11 percent from Friday to Saturday to $10.9 million — a tough task for an R-rated film. It’s on pace to finish the four days with about $34 million.

Among holdovers, “Avatar” continues to hold strong, adding $9.2 million Saturday — only a 21 percent week-to-week drop — and pacing to finish the weekend with another $22 million.

Meanwhile, last weekend’s box office champ, Sony/Screen Gems romantic drama “Dear John,” experienced a 57 percent week-to-week drop Saturday and is on pace to finish week two with $15.3 million. Its cumulative domestic gross would be over $53 million, should that four-day estimate hold up. The film was fully financed by Relativity Media at a reported cost of $25 million.

Despite dominating the female movie-going audience last weekend, “Dear John” did not hinder the Gary Marshall-directed “Valentine’s Day” one iota.

In fact, not even a rancid 15 percent “fresh” score on movie-review aggregator site Rotten Tomatoes had much impact, with the film’s opening souring past a reported production cost of $52 million.

Meanwhile, needing the hot start even more, fantasy film “Percy Jackson” was co-financed with Dune Entertainment and Ingenious Film Partners and shot for a reported $95 million.

"Percy Jackson has only a $31.1 million estimated gross through Sunday, but with kids out of school Monday for the holiday, Fox officials expect to sail past the $40 million mark. "We’re clearly the family choice right now," Aronson said.

For its part, “The Woflman” came in at a reported $110 million after tax breaks were realized. Opening simultaneously in 37 foreign territories, the film also grossed an estimated $21 million internationally  through the first three days of the weekend.

Overall, domestically, the box office is pacing about 4 percent ahead of its $216 million record total from last year’s four-day President’s Day period.

“We have three new pictures coming into the market with three different audiences, and all of them connected,” Aronson said.

Here’s a look at the top 10 of the domestic box office through the first three days of the holiday weekend: