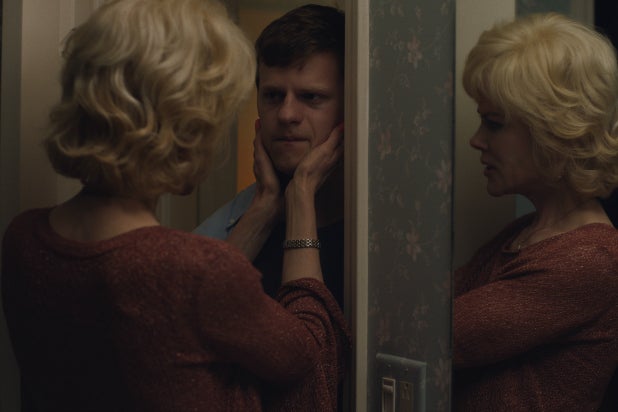 “Boy Erased,” which is based on Garrard Conley’s 2016 memoir, is comprised of some strong scenes, some flashy scenes, and some scenes that are just scenes. It makes its argument against gay conversion therapy — a form of torture usually rooted in the self-loathing of the so-called therapist — persuasively. And it is dramatically impressive most of the time, but it is also very messy and uneven.

“Boy Erased” is packed with well-known performers, and this can be distracting. Pop star Troye Sivan and Canadian auteur Xavier Dolan play two of the inmates at a detention center called Love in Action, which is where our teenaged protagonist Jared (Lucas Hedges) is sent by his Baptist minister father (Russell Crowe) after he confesses to homosexual feelings. While Sivan and Dolan will likely bring some attention to this film from their respective fan bases, their presence on screen only emphasizes the public-service-message aspect of this production.

The best performance in the movie comes from Joel Edgerton, who also wrote the screenplay and directed “Boy Erased.” As the fearsome Victor Sykes, who runs Love in Action with an iron hand, the Australian Edgerton does a convincing Southern accent, and he makes his character into a frightening antagonist. Edgerton exactly captures the forced jocular humor of this sort of man and also the willfulness and the cruelty. Whenever Edgerton’s Sykes is on screen, it always feels as if something very bad could happen at any moment, and this well-intentioned movie needs that jolt of danger.

Most of “Boy Erased” takes place at the Love in Action center, with some flashbacks to Jared’s past revealed at strategic points. Plenty of disturbing things happen at the center, yet the film’s most upsetting scene is the one where Jared’s desire for a fellow student leads to his rape and then a tearful plea from his rapist to both hear a religious confession and keep what happened secret. Edgerton films the attack in a punishing long take, and then he separates the two boys visually as Jared tries to process what has just happened to him and what is being asked of him afterward.

Hedges has a very difficult job here. He has to play a character who is basically passive and often beaten down in various ways, and there are several points in the narrative where a vise seems to be closing around Jared that he might have real difficulty escaping. Edgerton has filled the Love in Action center with formidable gatekeepers, particularly the mean-minded Michael (David Joseph Craig, “The Gift”), who purveys a very particular sort of iron-jawed Southern boy nastiness.

As depicted in the film, Love in Action is a place run by men who are clearly repressed themselves, and emotional annihilation is only one of the weapons they brandish at the kids who are in their power. There is a sickening scene where a boy named Cameron (Britton Sear) is beaten with a Bible by his own family members, one of whom appears to be his little sister, who shows a notable reluctance to hurt her older brother but is nonetheless forced to hit him.

In the early scenes of “Boy Erased,” Jared’s mother Nancy (Nicole Kidman) is shown waiting for him at a hotel and talking to him when he leaves the center for the day. At first it seems inevitable that Nancy will stick up for her son and get him out of there, but Edgerton tightens the screws just enough in the mid-section of the film that we begin to wonder how hard this might eventually be for her.

“Boy Erased” tends to hit every one of its dramatic beats very hard, but this is effective in the mid-section, because we begin to feel some dread that Jared might be stuck at this place for a year or more and have to forgo college, which is what Mr. Sykes recommends. There is a scene where the inmates hear a father telling off Sykes in the parking lot of the center and yelling at Sykes for “humiliating” his son, and this has power precisely because we never learn what Sykes did to the boy.

Nancy’s essential glamour comes naturally to Kidman, one of the few present-day actresses who can reliably conjure this quality, and the pay-off scene where Nancy stands up for her son is everything we might expect, but the two last scenes that Jared shares with his father don’t feel like life but like written points that need to be made. Nevertheless, what lingers in “Boy Erased” is the sense of malignancy at this conversion center, which Edgerton manages to create as both an actor and a director. This malignancy will hopefully be easier to identify and rectify because this movie exists.