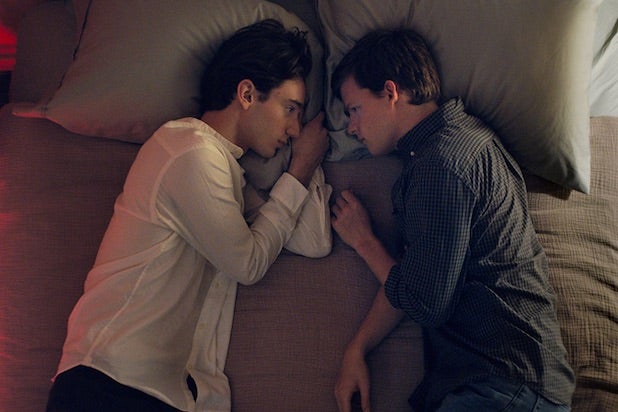 Earlier this year, “The Miseducation of Cameron Post,” an outstanding film about gay conversion therapy starring Chloe Moretz and directed by Desiree Akhavan, premiered at Sundance and opened in August to good reviews. Now, the Telluride Film Festival has premiered “Boy Erased,” another film on the same subject adapted and directed by Joel Edgerton and starring Lucas Hedges, Nicole Kidman and Russell Crowe.

Both films seek to reach the tens of thousands of teens every year who are forced into damaging conversion therapy that attempts to “fix” what their misguided parents believe is “wrong” with them. “Cameron Post” was released unrated because of its frank sexuality, but “Boy Erased” was made to carefully escape that fate, as Edgerton made clear in the Q&A afterwards.

What to show, what not to show — that was the question. Edgerton navigates the boundary with grace and sensitivity.

Based on the memoir by Garrard Conley, “Boy Erased” tells the story of the 19-year-old son of a Baptist preacher (Crowe) who is outed by a fellow student (its own complicated story) and told in no uncertain terms by his father that he will be banished from their family, from their lives, if he doesn’t seek “treatment” for his “affliction.”

Woven throughout this film is the ingrained myth that being gay is “wrong” in the eyes of God, that the supposed creator of all things somehow creates children that parents will need to repair. In the film Garrard is Jared and he’s played by the wonderful Lucas Hedges. Jared earnestly approaches the conversion therapy, trying to accept that he can be trained to change.

As Jared struggles to approach the laughable and absurd lesson plans — which mostly blame parental mistakes and outside influences for contaminating the supposedly pure versions of these kids — he comes to grips with what he knows to be true about himself despite the psychobabble pretense. They try to force-feed and reprogram him about who he should be, what he should do, how he should sit, stand and speak. They actually try to teach him how to front a macho facade, as if his outward mannerisms could alter his inner feelings.

Along the way, Jared is lucky enough to encounter people who help him see that there’s nothing wrong with him. A doctor (Cherry Jones) offers wise guidance, and a gay artist (Théodore Pellerin) shows him they can spend the night together just holding hands and the bed sheets won’t burst into flames.

Ultimately, Jared sees that he’s unable to live the lie any longer — not with the so-called therapists, not even with his own family. As one of the other kids tells him, you have to be ready to leave everything and everyone behind.

In the end, it’s Jared’s mother who undergoes the conversion. “I love God. God loves me, but I love my son,” she says. A logical progression as simple as that is all it takes to expand her awareness and acceptance.

Two films at Telluride this year feature Kidman as a mother, but the two roles — in “Boy Erased” and Karyn Kusama’s “Destroyer” — are on opposite ends of the emotional spectrum. Here, she’s a white-haired, long-nailed southern belle who would ordinarily stay quiet and defer to her husband’s authority. But along the way her mama bear rises up to come to the rescue of her son.

Kidman and Crowe have known each other almost all of their lives. They met when she was 17. “He drank champagne out of my shoe,” she said in the Q&A about meeting him for the first time. Watching them together as man and wife, after all these years — knowing what we know about their personal lives, their struggles, their successes — is quite something.

Edgerton is an actor’s director, and thus no one in this film is given short shrift. Each has plenty of room to work out what’s happening in their own trajectories. While his last film, “The Gift,” was promising, for some it didn’t quite hold together. “Boy Erased” is an accomplished film that avoids showy flourishes and instead focuses intently on character and story.

This is a film that should be seen on high school campuses across America. (Good luck with that.) But thanks to new distribution options, even in towns that refuse to play “Boy Erased,” kids who need to see it most will find it easy to access.

It’s endlessly saddening to hear about how many kids today still are bullied for being gay and driven to suicide. We should be long past this. This movie will be a beacon to teens who might otherwise have no sympathetic place to turn.

“Boy Erased” is a good movie and also an important one, one that might save lives if enough young people find their way to it. Likewise, it’s hoped that adults who chose to enter “treatment” on their own will get the message that self-acceptance is what matters. They don’t need to change. It is the world around them that must.