Brad Pitt says ex-wife Angelina Jolie deliberately damaged their wine company by selling her half to a “stranger” with a bad reputation – something the couple had explicitly and mutually agreed not to ever do, according to a new court filing.

Pitt’s team claimed in the Friday filing with the Superior Court of California that Jolie’s divestment strategy was designed “to inflict harm on Pitt. Jolie knew and intended that [businessman Yuri] Shefler and his affiliates would try to control the business Pitt had built and undermine Pitt’s investment in Miraval.” 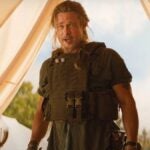 Also Read:
How Much Is Brad Pitt Actually in ‘The Lost City?’

Pitt says the things Shefler has done since taking over Jolie’s portion of the business are going exactly according to her plan, “and just as Jolie envisioned that is exactly what Shefler has done,” said Pitt’s attorneys.

.”Shefler has launched a hostile takeover of the wine business, destabilizing Miraval’s operations and seeking access to Miraval’s confidential and proprietary information for the benefit of his competing enterprise,” the court filing states.

Jolie’s sale of her portion of Château Miraval, located in the Southern French village of Correns, sparked the civil lawsuit. Pitt is suing for breach of contract; dealing in bad faith; and interference with contractual and business relations, among other things.

Pitt is seeking a trial by jury. As well as seeking damages “in an amount to be proven at trial,” and the purported sale made by Jolie, which he wants to be declared “null and void.”