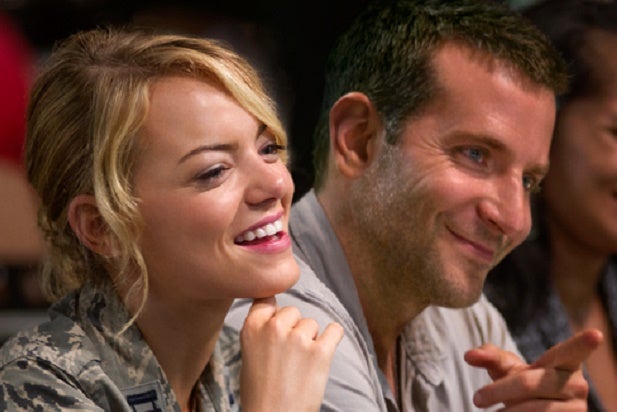 Box-office expectations for “Aloha” are very low going into Friday’s debut of writer-director Cameron Crowe‘s latest movie, an indicator of the difficulty Sony Pictures has had putting last year’s massive hack attack behind it.

“I don’t think this film has ever recovered from the buzz those emails started,” BoxOffice.com senior analyst Phil Contrino said ahead of release of the romantic comedy starring Bradley Cooper, Emma Stone, Rachel McAdams and Bill Murray. He sees an opening in the low-teen millions for “Aloha,” the latest from the man behind hits “Jerry Maguire” and “Almost Famous.”

“Those emails” were from former Sony co-chairman Amy Pascal and leaked last December as part of the massive security breach triggered by the impending rollout of the Seth Rogen comedy about North Korea, “The Interview.”

The negative comments about “Aloha” were found among the more than 30,000 leaked Sony emails that included shots at A-list talent like Angelina Jolie and Leonardo DiCaprio, the studio’s strategic plans and financial and health data about employees and business partners.

An even bigger data dump came in March when Wikileaks released more than 200,000 Sony emails and documents, indexed for easy reference.

“I’m never starting a movie again when the script is this ridiculous,” Pascal wrote in a message found in the first batch, “and we all know it. I don’t care how much I love the director and the actors. It never not even once works.”

The film, which co-stars Alec Baldwin, John Krasinski and Danny McBride, didn’t impress Pascal. And she wasn’t keen on Crowe’s characters in the Hawaii-set tale of a defense contractor (Cooper) falling for an Air Force pilot (Stone), or Crowe’s response to changes the studio has suggested.

“There is no more to do. Cameron never really changed anything,” she wrote. “People don’t like people in movies who flirt with married people or married people who flirt.”

She took a shot at producer Scott Rudin, too, noting that he “didn’t once go to the set. Or help us in the editing room or fix the script.”

“Aloha” had plenty of time for fixes before Pascal chimed in. The project landed at Sony in 2008, with Ben Stiller and Reese Witherspoon in the lead roles. They dropped out and the film — at one point titled “Deep Tiki” — was in limbo for four years while Crowe tinkered with the script. Retitled “Aloha,” it was set for a Christmas Day release last year, then subsequently pushed to this date.

We’ll find out how accurate Pascal’s analysis is over the next few weeks. A mature-skewing film in a sea of summer sequels, “Aloha” was always a long shot to break out at the box office. And to what extent Pascal’s comments reverberate with moviegoers is hard to assess, but they aren’t going to help.

Also Read: Bradley Cooper in Talks to Direct 'A Star Is Born'; Beyonce Eyed for Lead

Reviews are embargoed until Thursday, and on social media, the film is pacing behind “This Is How I Leave You,” another romantic comedy that opened wide to $11.5 million in September and topped out at $41 million for Warner Bros.

That’s an OK number if your budget is $19 million, but “Aloha” cost $37 million, plus marketing.

“We have this movie in for a lot of dough and we better look at that” wrote Pascal in the earlier email, as Sony was in the midst of job cuts and a cost-cutting push.

But by Hollywood standards, it really isn’t a lot of dough. RatPac, Regency Enterprises, Scott Rudin Productions and Vinyl Films are all in and Fox is distributing overseas, so that will mitigate things if it does wind up in the red.

“Aloha” could surprise. Because it skews toward older moviegoers, the amount of the opening isn’t as important as word of mouth it draws. If it’s positive, the romantic comedy might provide an appealing alternative to younger-skewing summer fare and play steadily for weeks.

But if it’s negative, we’ll be saying “Aloha” quickly.