The film, which stars Cooper as Bernstein, is the actor’s first directing project since “A Star Is Born.”

Cooper stars in the upcoming film about the legendary conductor and composer (who wrote “West Side Story”) alongside Carey Mulligan, Matt Bomer and Maya Hawke. Mulligan plays Felicia Montealegre, who marries Bernstein. 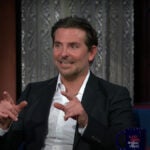 Check out all the new images below.