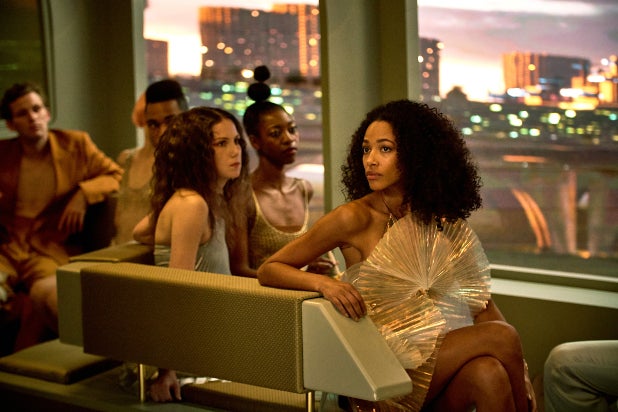 Aldous Huxley’s seminal 1932 novel “Brave New World” imagines a future dystopia disguised as a utopia, where humans are genetically engineered into a caste system and have left behind all forms of religion, monogamy and family.

But Huxley’s novel, written in the very early days of communism and the Soviet Union, was very much a product of its time. The version that will premiere Wednesday as one of Peacock’s first original series tries to bridge the gap between the pre-World War II era and our current tech-filled society. And just like society has replaced radio and land-line telephones with streaming and iPhones, “Brave New World” in 2020 features some modern updates.

“We have the benefit of 90 years on Huxley,” “Brave New World” showrunner David Wiener told TheWrap. “We have to take some of what he imagined to be true in the future, and pass all that through the filter of what we know about our culture and technology.”

Some of the changes are more cosmetic. Two important male characters, world challenger Helmholtz Watson (Hannah John-Kamen) and world controller Mustafa Mond (Nina Sosanya), are played by minority female actresses. Others changes in the story remove what would be considered now to be insensitive (in the book, the character of Lenina Crowne describes things as “being queer”). This is most apparent in how the series depicts the Savage Lands, turning it from an Indian reservation (full of Native American stereotypes) into a theme park.

The Savage Lands are purported to show how the world was before the supposedly utopian days of New London, when age, greed, sickness and suffering were still prevalent. Weiner said that depicting it as the book did “just didn’t align with where we are culturally, and so it became ‘How do we make it feel like its connected to our world?’ And so we came up with the idea of seeing our Savage Lands as more of an adventure tourist destination.” (Small spoiler alert: It features a pretty on-the-nose Black Friday dig).

“There’s a place where Bernard and Lenina go to watch performances that are really propaganda, and that propaganda is intended to reinforce the New Worlders’ sense of superiority,” said Wiener. “It’s not totally unlike the way that some tourism happens today, when people from privileged First Nations go to third world nations and get an ‘authentic experience.'”

Harry Lloyd, who plays Bernard Marx, explains the differences between the book and the novel as one necessitated by the different mediums. “The philosophy is shared and the characters and the premise are the same and the world’s rules are the same, but the story is a bit more complicated. It’s a bit more character-led,” he said.

Lloyd added that the show, like many novel adaptations, will likely go “potentially beyond the book and its world” in a second season.

“In the book, he’s shorter; in our one, you can’t quite put your finger on it when people don’t treat [Bernard] like the Alpha class that he is and why he doesn’t feel like it,” Lloyd continued. “In our first season, his emotional journey goes beyond what he gets to experience in the book.”

Also Read: Here Are the TV Shows and Movies That Will Be Available on Peacock at Nationwide Launch

Wiener also found ways to use the ad breaks as a way to drive home another one of Huxley’s points: The over-commercialization of society.

“At the core of Huxley’s ideas is an acknowledgement of how people receive media, and what a part of the world it is — the interaction between people and entertainment and distraction,” Wiener says. “Huxley was so concerned that people would become so sexually stimulated. And so pharmacologically numb and so immersed in media and entertainment that they wouldn’t inhabit any particular moment; they wouldn’t look within themselves, they wouldn’t look without themselves. The irony of making a television show about that is not something that we’ve ever lost sight of, and don’t expect our audience to lose sight of.”

There are other aspects of Huxley’s work that were more dead on and, frighteningly, more closer to today than the 600 years in the future where the show is set. The widespread use of the drug Soma — a pill that causes euphoria and happiness — feels much more timely in the throes of the real-world opioid crisis, as does the Huxley’s fear of the rising threat of totalitarianism and the loss of individual thought.