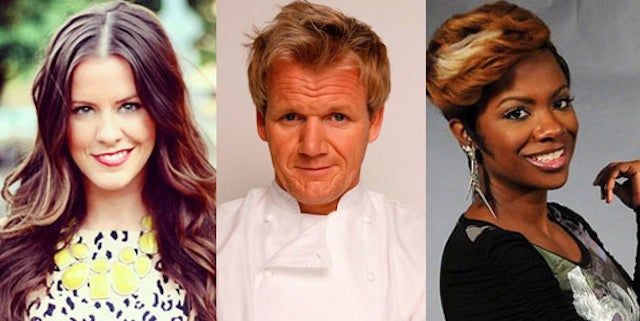 Bravo announced 17 new series on Tuesday, including a production by celebrity chef Gordon Ramsay, a “Real Housewives-like” project with BBC Productions, and a continued push into scripted television.

The network, which thrives on a frothy mix of fashion, feuding women, and a look at how the other half lives that leaves many viewers less than envious, is continuing its winning formula. Among its new reality shows is "Below Deck," which rehashes the "Upstairs Downstairs" formula, this time on the high seas. (It worked for "Titanic.")

Bravo sticks to its familiar themes with three new scripted shows, which include "High and Low," about two rival, resentful brothers who open a restaurant together in a 1980s Manhattan.

Best known for his numerous culinary shows for Fox, Ramsay is executive producing the American version of his UK series, “Ramsay’s Best Restaurant,” which pits restaurants against each other for the title, "America's Best Restaurant."

And while executive and on-screen talent Andy Cohen famously declared that there would be no more new “Real Housewives” series, that hasn’t stopped Bravo from doing other series with similar qualities. This time, the cable network goes into business with BBC productions on a new unscripted series with the working title, “Ladies of London.”

And, of course, Bravo (following in the footsteps of Viacom’s MTV and VH1) is continuing its push into scripted series.

Aside from the already announced "The Real Housewives of Atlanta" spinoff, "The Kandi Factory," castmate Phaedra Parks also has a show in development with the working title, "Rich People's Problems."

Plus, Bravo announces another "Bravolebrity's" spinoff: "Courtney Loves Dallas." It will follow “Most Eligible Dallas” star Courtney Kerr as she, with the aid of her "sassy, dynamic friends," tries to "rope herself the perfect southern gentleman, while trying to make a name for herself in the fashion industry," according to the network.

The network announced its new slate while boasting that it now ranks ninth in the key 18-49 demographic, and is up 8 percent in total viewers this year.

Produced by 51 Minds with Mark Cronin and Courtland Cox as Executive Producers.

The upstairs and downstairs worlds collide when this young and single crew, known as “yachties,” live, love and work together onboard a privately owned extravagant yacht.  Working and tending to the ever-changing needs of their demanding charter guests is not always smooth sailing.

The series follows a group of single, up-and-coming movers and shakers in New York's elite circles of real estate, fashion, and media.  These ladies are aggressive in their pursuit of personal and career goals, but in this cutthroat world where egos are high and the drive to succeed is even higher, success can come at a steep cost.

Breakout star Courtney Kerr of “Most Eligible Dallas” navigates the lively Texas social scene with her group of sassy, dynamic friends.  She’s out to rope herself the perfect southern gentleman, while trying to make a name for herself in the fashion industry, but Courtney quickly finds that taking the bull by the horn isn’t as easy as it may sound.

Produced by Engel Entertainment with Steven Engel as Executive Producer.

When couples go from “I do” to “I don’t,” Vikki Ziegler is who they call to mediate, advise and divide their assets out of court.  Why let a judge decide your fate when the Divorce Diva can cut through all the drama to determine who will get what?

Produced by Brownstone Entertainment with Drew Brown and Bob Gillan as Executive Producers.

Single, successful, beautiful and connected to the restaurant and food industry in Los Angeles, these ladies take on the traditionally male-dominated industry in their own way as they juggle a world where business always mixes with pleasure.

Produced by Punched In The Head with Craig D’Entrone and Amelia D’Entrone as Executive Producers.

From spoiling and severe punishments to helicopter and new age methods, this is parenting at its most extreme.  Each episode gives a candid look at two different households with very unique styles of raising their children — and each family strongly believes their methods are superior.

Produced by Embassy Row with Michael Davies as Executive Producer and True Entertainment with Steven Weinstock, Glenda Hersh and Lauren Eskelin as Executive Producers.
This topical, fashion-based talk show features two of Atlanta’s style elite, celebrity hairstylists Derek J and Miss Lawrence, and New York’s fashion maven and media socialite Bevy Smith.  The trendy opinionated trio will cover anything and everything related to the world of fashion and beauty, from haute couture to celebrity style to unusual outfits from around the globe, giving their unique perspective on the trends, hits and misses.

Grammy Award winner and multi-platinum songwriter Kandi Burruss of “The Real Housewives of Atlanta” helps 16 aspiring artists jumpstart their dreams of stardom.  Burruss gives two protégés with no industry experience the opportunity of a lifetime — a shot at an original song release and music video produced by The Kandi Factory.

Produced by Monkey Kingdom with Will Macdonald, David Granger and Lauren Lazin as Executive Producers.

From the moment they say “I do” to their one-year anniversary, for the first time ever we see up close, the first year of marriage in “Newlyweds: The First Year.”  This groundbreaking series follows four diverse couples coast-to-coast experiencing the daily trials and tribulations of their first 365 days of marriage captured by Emmy Award-winning and Oscar-nominated documentarian Lauren Lazin.

The world’s most exclusive, expensive houses are throwing open their doors to a panel of passionate property experts in this new panel talk show that explores the world of luxury real estate, cutting-edge home technology and trendsetting décor.  Every week, our property and design-obsessed host and esteemed panelists will present the homes that give them “Property Envy.”

The notoriously closed society of Charleston, South Carolina unlocks the gates of their centuries-old plantation homes for a real-life look at how modern-day Southern aristocracy lives.  Get charmed by the social scene which is bound by tradition and ostentation unlike any other culture in America, through a group of the city’s most charismatic gentlemen and their Southern belle equals.

Atlanta just got even hotter as this group of ambitious young go-getters on the cusp of realizing their dreams work hard, but play even harder.  They are shaking up the city’s fashion, music, hospitality and real estate scenes.

This docu-series follows former professional basketball player turned popular gospel singer/recording artist and minister Ben Tankard, his blended family and their journey in expanding the family fortune.  From music-producing to NBA life coaching and motivational speaking, this business-oriented family strives to keep on top of their game, but finds their true passion lies in ministry.

It’s crunch time for best friends and business partners Katrina and Karena, the fearless duo behind Toneitup.com.  While some entrepreneurs have a business plan, these girls use their "street smarts, not book smarts" to push themselves and their brand to wild extremes.

Set in the glittering, class-conscious city of London, this new series follows a group of elite British socialites and American expats enjoying the upper crust of the high society world.  And while these Brits and Americans all live in the same city, have been married to rock stars, dated royalty, are darlings of the paparazzi and enjoy wealth beyond belief, they are still culturally, worlds apart.

Meet members of the "boomerang generation" – six young women from Great Neck, Long Island who return to their pampered lifestyles in the comfort of their parents’ estates and at the expense of their fathers’ bank accounts.  This new docu-series offers a window into their unique family dynamics and personal lives filled with labels, luxury, and love trials.

Produced by Half Yard Productions with Abby Greensfelder, Sean Gallagher, and Nicole Sorrenti as Executive Producers.

This young, successful Chicago "it" crowd are working the boardrooms and the bedrooms, eager to make a name for themselves, find love and succeed at any price.  With a social circle made up of best friends, former lovers, and current lusts, things are bound to get interesting.

Based on the book series by Executive Producer Vicki Iovine, this one hour dramedy follows a best-selling author of a self-help book series who is secretly hiding her separation from her husband as she starts to navigate her life as a single woman in her 40’s in Los Angeles.  She starts to side with and take advice more from her divorced friends rather than her married ones and it leads her to some unexpected and life-changing experiences.

Based on the upcoming novel from Sara Sheperd (Pretty Little Liars, The Lying Game), this one- hour drama follows one of the most prestigious and wealthy families on the Upper East Side who have built their entire fortune on the business of diamonds.  Due to a clause the grandfather placed in his will, only his granddaughters are set to inherit his massive fortune…these are the heiresses.  After the death of their cousin, the remaining heiresses try to figure out if the family curse is real or not, and if not, who killed their cousin, and more importantly, which one of them is next on the hit list?

This period drama takes us through the worlds of 1980’s art, food, and Wall Street through the eyes of rival brothers, from two different mothers, who open a restaurant together, forcing the two estranged families to finally deal with the years of resentment between them.  The show focuses on the lives of the people who work at the restaurant, are discovered at the restaurant and the mysterious woman at the center that tears the brothers apart.

When money is no object and you want to make sure your child gets accepted into one of the top universities in the world, what else do you do but hire the country’s best college admissions consultants. “Ivy League Confidential” follows a group of four elite college admissions consultants in New York and Los Angeles as they deal with over-the-top, pampered clients (both the parents and the children) that, unfortunately for our counselors, expect nothing but Ivy League results.

When the rich and famous of Atlanta have a dispute, they know that only one lawyer will deliver some cold, hard justice: Phaedra Parks of “The Real Housewife of Atlanta.”  Whether it’s friends battling over an $8,000 loan or accusations of stolen Chanel handbags or confusion over a prenuptial agreement and whether it entitles you to two or three live-in staff members, the rich certainly have an odd sense of what qualifies as a problem in today’s world, and Phaedra will be there to help them sort it all out.