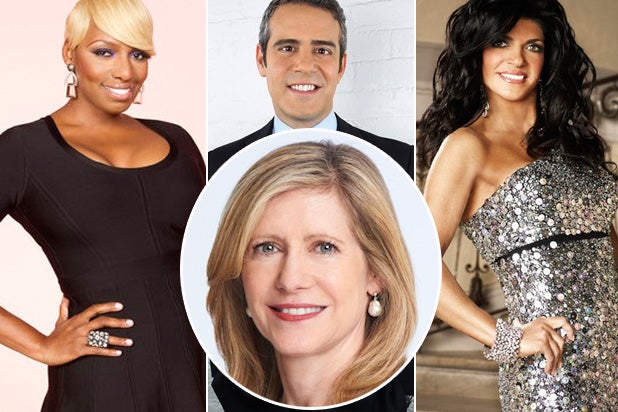 Coming off a year of growth, Bravo has been moving beyond being known as the “Real Housewives” and “Top Chef” network by bulking up its lifestyle programming.

Now, its viewers have shows like “Shahs of Sunset,” family series like “Thicker Than Water,” buzzy work series like “Below Deck,” the growing “Million Dollar Listing” franchise and late night offerings like “Fashion Queens.”

And at some point, Bravo will actually commit to a scripted series after missing its original goal of launching one in the fourth quarter of 2013.

It passed on an adaptation of cult hit, “Heathers,” a series based on the movie “The Joneses,” and single mother drama “Rita.” Currently, it’s producing a pilot based on the book, “Girlfriend’s Guide to Divorce” with Marti Noxon (“Buffy the Vampire Slayer,” “Mad Men,” “Grey’s Anatomy”).

“Our attitude has been we have an embarrassment of riches when it comes to unscripted shows that already target our core audience, who are highly educated and upscale,” Bravo and Oxygen president Frances Berwick told TheWrap.

“That gives us the luxury to be able to take our time and find the perfect show that fits the brand and we really believe is additive to the network,” she continued. “It has felt to you guys like this is a long, drawn out process. And note, I feel it’s a long, drawn out process compared to the speed in which we can go with reality. For us, it’s not about doing it. It’s about going into scripted right because it’s totally on brand and we think our audience will love it. I would say we’re getting closer.”

Berwick also spoke with TheWrap about whether its “Real Housewives” franchise is still aspirational, former executive Andy Cohen’s new deal and  her plans for Oxygen network.

“Real Housewives” has been a cornerstone for Bravo and it was a goal to make the series aspirational for women. But, with all the legal problems for Teresa Giudice and bankruptcies of several of the women, among other things, is the series still aspirational?
Frances Berwick: It’s absolutely a goal and I think it’s still true… I think you look at these women’s lives and you may not wish to have their lives, but you appreciate the lives that they live and the houses they live in, that overall lifestyle can be very aspirational while you really connect with them on a human level because of what they’re going through and their approach to life.

I think often our relationships to these characters change. Even during the course of the season, there are some characters where you think ‘I don’t understand where they’re coming from” or “I don’t even like them,” and I think you can come full circle and absolutely adore them by the end of the show and conversely have the opposite reaction. But I think it’s very fluid in the way that a lot of friendships and relationships and the relationship with the audience. We see this time and time again. When there’s any direct interaction between our viewers and these characters, whether that’s social media or meeting in the flesh, they feel like these are friends or people that they know. That’s how they embrace them. It’s a very different type of relationship from any other shows.

Andy Cohen recently stepped down from his executive role at Bravo. Was that a tough decision to make?
FB: Yes, of course it’s tough because he’s such a fun person. But, the good news is he’s still going to be here in the office. I feel like he’s around so much and he’s such a part of the DNA and will continue to be so, but it doesn’t really feel like we’ve let him go.

You now have oversight over Oxygen, as well. Many have characterized its programming as downscale. Are you looking to change that?
FB: We’re definitely appealing to young women. Everything we’re looking at is who are these women, what are they not getting on other networks and really focus in on a midrange audience. The place in the market where there’s definitely some white space doesn’t involve downscale.