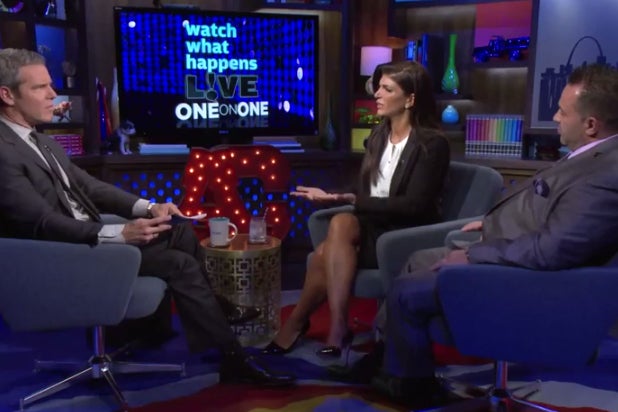 The sob story continued Thursday night on Part 2 of this week’s “Watch What Happens Live: One on One” special, as host Andy Cohen interviewed Bravo’s “Real Housewives of New Jersey” stars Teresa and Joe Giudice about their recent prison sentencing.

Since then, unseen interview footage has been released. The newest footage, picked up from the cutting room floor, has Teresa still claiming that she’s learned a lesson, though the reality personality clearly doesn’t believe she earned the punishment — which in her case will be 15 months behind bars. Her husband Joe got an even harsher 41 months; they will serve the time separately for the sake of their daughters.

“I never hurt anyone,” Teresa said in the unaired footage about a statement she made earlier this season when she wondered out loud why all this legal stuff was happening to her. “I’m misunderstood.”

While they will have to liquidate their assets to pay the hefty government fines, the Giudices plan to stay in town for their daughters, who they continue to focus on.

“That’s all I think about is them,” Teresa said of the girls. “They’re my life.”

Teresa and the notoriously quiet Joe reiterated that the lesson learned from their situation is to never again sign something they don’t understand.

There is also a takeaway of the powers of inner strength that Teresa has personally adopted: “If you fall down, you pick yourself right back up and you keep going.”

“It’s just a short time in our life if you think about it,” Teresa said of the upcoming jail time. “God willing, we’ll just do it and we’ll move forward.”

Watch the videos below: