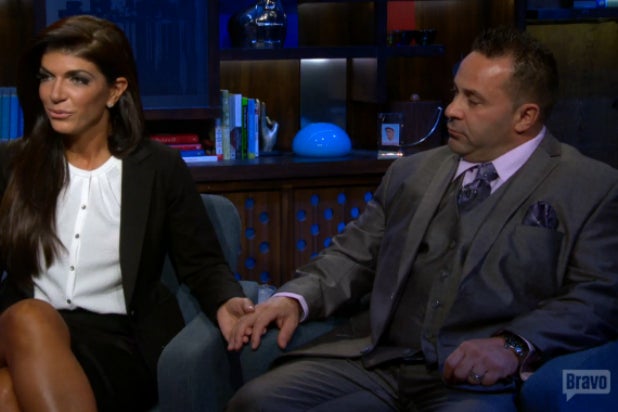 “Real Housewives of New Jersey” stars Teresa and Joe Giudice sat with Andy Cohen to discuss their sentencing on a special “Watch What Happens Live,” marking the couple’s first TV interview since being sentenced.

“My nerves were shot. I had sleepless nights,” Teresa Giudice, who got 15 months said in the below preview clip. “Of course, I was shocked,” she added of her sentencing. “It was very unexpected.”

Teresa shouldered some blame for her role during the conversation, admitting that she needs to read contracts before she signs them — or at least hire a lawyer who can.

The sit down appearance premieres Monday night on Bravo.

In a second clip, also posted below, Teresa spoke about her daughter Gia’s innocent expressions of support. Teresa expressed the need for Joe to step up his parenting to be a little more hands on while she’s away.

For his part, Joe was notoriously silent in the two brief videos embedded below. He received 41 months himself for fraud. The pair will serve their sentences separately for the sake of their four daughters.

The couple initially pleaded not guilty in August of 2013 to 39 counts, including mail fraud, wire fraud, bank fraud, bankruptcy fraud, making false statements on loan applications and failure to file tax returns. Those amounted to more than 50 years maximum time combined in prison and more than $1.5 million in combined fines.

The special “Watch What Happens Live One-on-One with Teresa and Joe Giudice” premieres Monday at 9 p.m. ET on Bravo. The second part of the interview debuts Thursday Oct. 9.