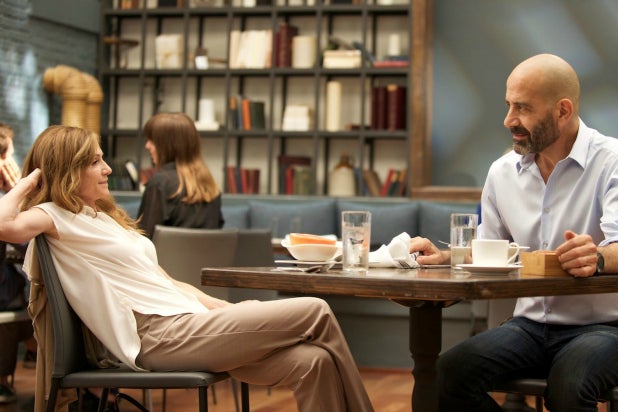 “Breakable You” is like a kinder, gentler version of Woody Allen’s “Crimes and Misdemeanors”: a rumination on human fallibility and corruption with lower stakes but a lot more sexual heat in its heart.

Freely adapted by writer-director Andrew Wagner (“Starting Out in the Evening”) and co-screenwriter Fred Parnes from Brian Morton’s well-reviewed novel, “Breakable You” is the story of the Weller family, a cluster of neurotic New Yorkers who live outwardly charmed but inwardly tempestuous lives.

“Matriarch” is perhaps the wrong word for Holly Hunter’s lithe and whippet-thin Eleanor, a character notably more obese in the book. But Eleanor is the beating heart of the Weller family, a self-sacrificing but self-aware mother to her wayward daughter Maud (Cristin Milioti, “Fargo”) and a long-suffering woman whose compassion for others is externalized through her psychotherapy practice.

About the only real challenge to Eleanor’s “I’m OK, You’re OK” approach to life is her ex-husband Adam (Tony Shalhoub), a monstrous narcissist whose best quality is that he’s so utterly and openly true to his own self-interest. Adam is a somewhat celebrated Broadway playwright, and he’s in the midst of a catastrophic dry spell, possibly signaling the end of his once-promising career.

When Adam unexpectedly comes to possess the only existing copies of an unknown theatrical masterpiece written by a dead friend, well, what’s a self-respecting narcissist with writer’s block supposed to do?

Changing Adam from novelist (in the book) to playwright is just one example of the blithe self-confidence of this adaptation. It works beautifully, giving Wagner an easy way to externalize some rather heady ideas (and yes, Kant and Schopenhauer are name-checked).

Both relationships are deeply carnal and bracingly direct. The Hunter-Molina sex scenes, in particular, are startlingly raw and, in that way, liberating. After all, when was the last time you saw a screen couple in their mid-50s performing hot sexual action?

In a strong field of excellent performances, the standout is easily Shalhoub, who is enthralling and almost entirely sympathetic in what could have been a monochromatic bad guy part. Shalhoub’s Adam is a riveting example of the old Jean Renoir dictum about how in real life, “every man has his reasons.” He’s a bastard who does bad things, but he just can’t see himself that way, so we don’t either. When Adam finally does have a moment of self-awareness, it’s more a small bow to the inevitable than a shattering epiphany, and therefore perfectly in character for a man who worships so ardently at the temple of self.

Adam ticks off most of the boxes for villainy in our fraught cultural moment: He’s an entitled male, unthinkingly exploitative of every woman in his life. He would be mercilessly punished by almost any other thoughtful film. By letting Shalhoub’s Adam occupy so much space without passing an easy judgment on him, Wagner presents a vision of comedy like Shakespeare’s — not punitive, but holistic.

“Breakable You” never endorses Adam’s narcissism, but it’s generous enough to admit that even the worst among us have a seat at the human feast.