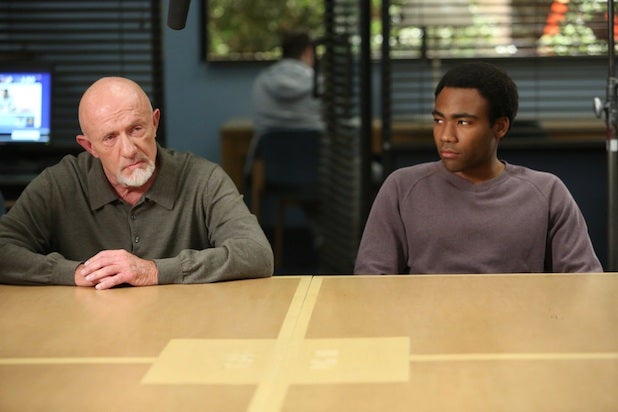 “They called on the phone and said, ‘Do you want a job?’ And I said yes, and that’s how I arrived here, because I’m so f–king funny,” he told TheWrap during a visit to the NBC Comedy’s set.

“I think I just fell into it, I liked it and it’s written well,” he added.

Signed on for 11 episodes, Banks spoke with TheWrap about working his comedic muscle, the show’s cast and what we’ll learn about his character.

TheWrap: How would you describe Professor Hickey?
Jonathan Banks: I’m still discovering Hickey. I really am. I probably won’t, like with most characters I do, I won’t know about Hickey until probably a couple years after I finish doing it. I mean really, what’s difficult for me, because comedy is not my world, so when Hickey does something that is totally, absurd and comic, it’s a stretch for me. You just have to go with it and have a good time.

You’re best known for drama, so is comedy like working a new muscle?
JB: I’ve played a lot of bad guys over the years, a lot of hardcore guys. At the same time, I’ve done a lot of comedy. I have done this for 46 years, since I got my first paycheck, so there’s comedy in there and it’s always fun to drop back in there.

Do you have a favorite storyline or character that you’ve enjoyed working with the most?
JB: I do like when you find a true personal relationship with any of the characters, whether it’s [Joel McHale‘s] character or [Alison Brie‘s] character or [Gillian Jacob’s] character, you like to make that honest connection. And every once in a while, there’s that glimmer where you got that line in where something happens, where you get to really talk. [Danny Pudi‘s] character, I love. We’re about to finish our last scene where these two total opposites make a connection and I love that, they make a real human connection.

You arrive as Dan Harmon returns to the show. What’s your take on him?
JB: I enjoy the total flight into nonsensical fantasies. That’s what I love. There is a lot of what I like that he does. It’s fun, it’s new to me. I’ve never done anything like this. I’ve done sitcoms, but not like this.