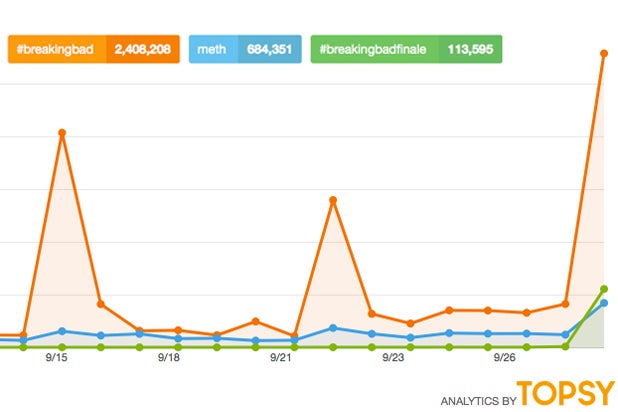 “Breaking Bad” fans were the ones who tweeted during the show’s Sunday night finale.

AMC announced that, according to Nielsen’s SocialGuide TV tweet tracker, there were 1.24 million show-related tweets during the finale’s east and west coast airings, with a peak of 22,373 tweets per minute as the east coast airing began.

That didn’t quite match the current record for show tweets, held by ABC Family’s “Pretty Little Liars,” which had 1.97 million tweets during the airing of its season finale in August.

Social analytics company Topsy, which tracks the usage of keywords and terms across the Twittersphere, showed that there were over a million mentions of “Breaking Bad” and 550,000 mentions of “#breakingbad” on Sunday.

Both terms enjoyed bumps every Sunday over the month of September, but yesterday’s topped them all. The same was true for Walt and Jesse, “Breaking Bad’s” central characters, with nearly 200,000 and 125,000 mentions, respectively.

And while meth usually enjoys fairly steady traffic Twitter, it, too, saw an increase in mentions — just under 85,000, up from Saturday’s 26,000.

Even Albuquerque, where most of “Breaking Bad” was shot and where the show takes place, enjoyed a little lift on finale day, with just over 26,000. Most days in September, Twitter mentions of the city received about a 10th of that number.

Here’s how they all stacked up: