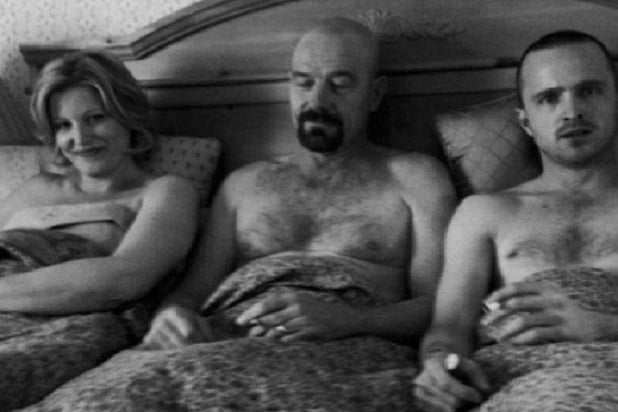 After getting into bed — business-wise — with Walter White to create a meth empire, will Jesse Pinkman end “Breaking Bad” by getting into bed with him literally for a romp with White and his wife Skyler?

Probably not, but that’s what “Breaking Bad” star Aaron Paul — who plays Pinkman in the AMC hit, which is winding its way down to its series finale — seemed to suggest with a photo he posted on Instagram on Friday.

The image, posted by Paul on Instagram on Friday, depicts Paul, along with his “Breaking” cohorts Bryan Cranston and Anna Gunn, under the sheets, with Paul and Cranston smoking ciggies in possible post-coital bliss.

It’s probably not a great idea for White to be smoking because, well, you know, his lung cancer returned along with the series this August, but judging from the last episode, he has more immediate health threats to contend with.

Such as the hail of bullets he was caught in at the end of the episode.

What could Paul’s photo suggest about the ending of “Breaking Bad”? Share your thoughts in the comments section.