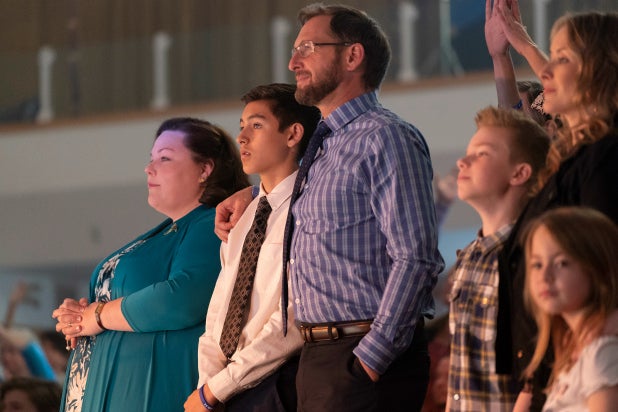 In journalism, there’s a term called “burying the lede” in which the writer stresses a secondary (usually, unnecessary) story and postpones the more essential facts and narrative. Sometimes it can work to the article’s favor, but it’s pretty rare. Roxann Dawson’s feature directorial debut “Breakthrough” buries the lede so much that it sacrifices the potential of reaching non-believers in favor of a narrative that is shallow and, despite being based on a true story, woefully uninspiring.

John Smith (Marcel Ruiz, Netflix’s “One Day at a Time”) is a regular 14-year-old: He’s a star on his basketball team, listens to pop music, crushes on a girl in his Missouri small town and goofs off with his friends. He is deeply loved at home but is plagued with feelings of being unwanted by his birth parents, no matter how much his adoptive mother, Joyce (Chrissy Metz), and father, Brian (Josh Lucas), shower him with affection.

Joyce is a devoted mother and a woman of unfailing faith who tries to connect with her son despite his attempts to keep her at a distance. Still, she’s there, driving him to practices, to school, and forcing him to attend Sunday service with the family, despite her distaste for Jason (Topher Grace), the new pastor “from California,” who brings technology as well as rock and rap music into the church. She’s conservative and more traditional, which prevents her from connecting with both the pastor and her son.

One day, John is hanging with two of his buddies; when they start to goof off on a frozen lake, it suddenly cracks open and all three boys fall in. The others make it out of the water in a few minutes, but as John was helping one of them, they accidentally kicked his face, knocking him out and sending him deeper into the lake. A firefighter rescue unit arrives within minutes and immediately jumps into action. When one of them, Tommy (Mike Colter, “Luke Cage”), can’t locate John, his crew prepares to turn the rescue mission into a retrieval: John has now been in the frozen lake well past the time a human brain can survive without oxygen. But because this is a faith-based film, here’s where the miracles begin: Tommy hears a voice telling him to “go back,” and that’s when he finds John.

At the hospital, an ER doctor and his team try to revive John without any luck. But Joyce has been praying, and alone in the room with her son’s lifeless body, she screams her prayers to the sky — and just like that, John has a pulse again. For the next 40 minutes or so, that exact scenario replays itself over and over. Science says, No! Joyce prays, and God says, Yes!

When Joyce praying by herself isn’t doing the trick, the film adds a few hundred people singing a beautiful song of worship outside his hospital window. (Music director Marcelo Zarvos’ score is one of the only things that works in the film.) As you might guess, John wakes up.

But it’s only in the last act when the truly gripping story of “Breakthrough” surfaces: John makes a full recovery and goes back to school, and face survivor’s remorse when a recently widowed teacher asks, “Why you?” She immediately shakes the question off, knowing it was out of line, but others who have lost or are losing their own loved ones confront him with the same question.

John gets upset over his inability to answer it, but writer Grant Nieporte (“Seven Pounds”) shies away from deeper exploration, opting instead for a quick happy ending where John calls being given up for adoption “not being wanted,” and thanks his mom for praying for him so much.

I am not religious, nor have I ever claimed to be, but I enjoy a good inspirational tale. And I do believe that miracles can occur and that those stories absolutely serve a purpose in mainstream films. But in “Breakthrough,” I found myself being dismissed as a viewer, being directed to put my confidence in a story that was layered in the superficial aspects of faith — to trust without question, and just to believe that prayer conquers all, even as the film provides no foundation as to why I should.

“Breakthrough” quickly loses sight of why people may seek out inspirational films, instead choosing to create an informercial that tells kids to go to church and pray with mom no matter what.