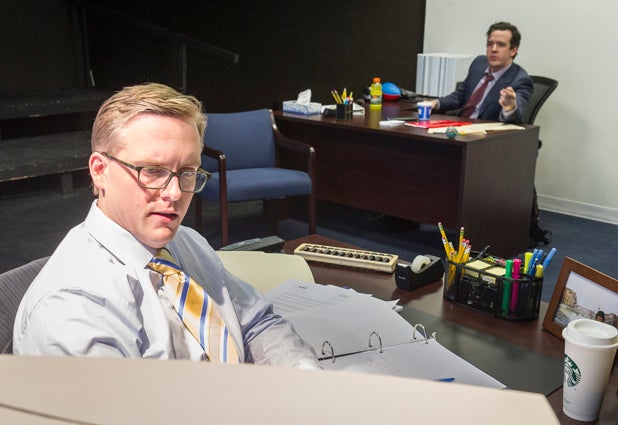 It’s only time before Beau Willimon‘s theater rep eclipses his high-profile in television. With both his stage work and “House of Cards,” he’s a superior storyteller, and his newest effort, “Breathing Time,” which opened Thursday at Off Broadway’s Teatro IATI, only confirms that reputation after the success of “Farragut North” and “The Parisian Woman.”

What’s Broadway waiting for? Any of those three Willimon plays are superior to the original plays seen so far this season on the Great White Way.

He’s especially good at having one of his characters drop a little bomb of information that takes the audience completely by surprise, changing irrevocably everything that’s to follow in the narrative. While that can be immensely satisfying for the theatergoer, it makes the job of reviewing one of Willimon’s plays something of a bitch. Who wants to be a spoiler? The best advice: See the play, skip this review, even though it doesn’t give away the secret. Not completely.

The surprise comes about 45 minutes into this 90-minute play, and it has to do with a bit of architecture. Nothing major.

Theatergoers who miss that very line early in the play about “voting for Bloomberg” won’t even know when “Breathing Time” turns the corner. Mike (Lee Dolson) and Jack (Craig Wesley Divino) are two financiers who could be found in a David Mamet play, only they talk like real people talk. Willimon also gives nods (in film, it’s called “homage”) to Mamet’s earlier, better plays, namely “Glengarry Glen Ross” and “Speed-the-Plow.”

As with so many Mamet plays, Willimon’s lead characters are con artists; Mike is into derivatives and Jack has a sure-fire plan to insure networks against ad revenue losses when their shows tank in the Nielsen ratings. These two guys certainly earn more than Mamet’s salesmen in “Glengarry Glen Ross,” but then again, they’re not all that successful because they’re sharing an office, albeit one with a spectacular view, although not quite the one Jack really, really wants.

Jack, especially, is daddy- and penis-obsessed in his banter, which is pretty scatological, too, and he has this odd habit of putting Mike on the defensive about his wife, his kid and any other topic that happens to come up. Jack could be a candidate for Asperger syndrome, and the brilliance of his business scheme only supports that diagnosis.

Yet, there’s a desperate stab at humanity in the way Jack alienates Mike and yet never stops trying to make contact, be friends, share intimacies. Mike, a basically decent and ordinary guy, repeatedly shuts him out.

Then Janet (Whitney Conkling) enters their office. She’s the new assistant Jack has hired; she’s also that other nod to Mamet: the so-called “Madonna character” from “Speed-the-Plow,” a young, smart woman oozing ambition. Mamet uses the type as a device to force his male characters into places they would never go. Willimon instead just lets his Janet percolate with intelligent resourcefulness as Jack toys with her and Mike just tries only to watch.

It’s a brilliant study in character, and anyone who’s spent so much as a day in a big-city office among employees jockeying for position and not identifying one bit with their work beyond the money it brings them will identify.

But those dreams of materialism are unexpectedly cut short.

In the second act, Willimon introduces Jack’s sister, Denise (Shannon Marie Sullivan), and Mike’s wife, Julie (Molly Thomas), who meet at a restaurant. Mike didn’t mention much about his wife, but Jack described his sister in detail, and it’s then that his long, rambling, totally absorbing stories to Mike about his bizarre father come into sharp focus. Denise shares her brother’s blunt but very real need to make  connections, and considering the disaster of their upbringing, it’s just about the most hopeful sign of humanity that you’ll see on a stage anywhere. It even offers hope for Mike and Julie’s son, whom we never meet.

“Breathing Time,” presented by the Fault Line Theatre, is blessed with a superb cast, which, under the direction of Aaron Rossini, achieves an understatement that resembles the best in film acting. Jack is a big, showy role, and yet Divino never appears to be stretching for effect even in the small confines of the 65-seat Teatro IATI. The play performs there through April 13.