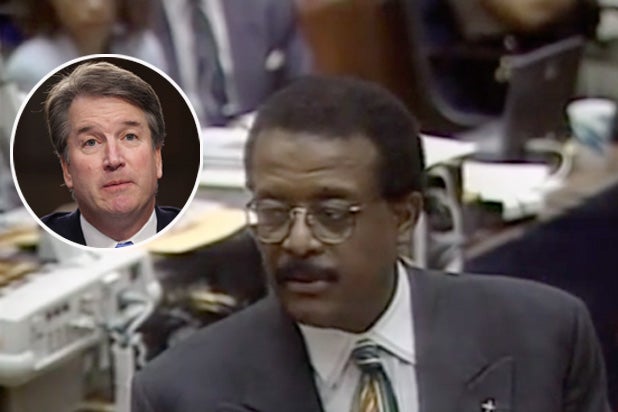 It’s a strategy that is similar to Johnnie Cochran’s defense of O.J. Simpson. Given the vast amounts of evidence against Simpson, Cochran did legal judo: He used the weight of the prosecutors’ evidence against them. So much seemingly strong evidence, Cochran suggested, could only be the result of a frame-up.

“You can’t win, can you?” Loyola Law School professor Laurie Levenson, who closely followed the Simpson case as well as the Kavanaugh news, joked on Wednesday. “I don’t buy into these arguments that when the evidence is too good, it can’t be true. We don’t usually see those arguments, except for here and in the OJ case.”

Republicans will have their first chance to reveal their strategy for protecting Kavanaugh when the first of his accusers, psychology professor Christine Blasey Ford, testifies Thursday to the Senate Judiciary Committee.

Ford accused Kavanaugh of attacking her in 1982, when they were both in high school. She said he drunkenly held her down and tried to silence her and remove her clothes.

A second woman, Deborah Ramirez, told the New Yorker on Sunday that Kavanaugh once waved his penis in her face after a night of drinking during their freshman year at Yale. And on Wednesday, a third woman, Julie Swetnick, came forward to contend that Kavanaugh and his friend Mark Judge — whom Ford said was also present during her assault — helped lure women into gang rapes.

Kavanaugh has denied all of the accusations. But for many on the left, Swetnick’s statement sounded like the last nail in the coffin on his Supreme Court hopes.

Senate Minority Leader Chuck Schumer called on Kavanaugh to withdraw from consideration. “If he will not, at the very least, the hearing and the vote should be postponed while the FBI investigates all of these allegations,” Schumer said.

But some Kavanaugh supporters had the opposite reaction to the second and third women coming forward.

On “The Daily” podcast on Monday, hours after the New Yorker story on Ramirez broke, conservative New York Times columnist Ross Douthat said the appearance of a second accuser had actually galvanized support for Kavanaugh among some conservatives, who consider the accusations “a smear.”

“And this camp, I should say, has actually gained momentum and support on the basis of the second allegation,” Douthat said. “Ronan Farrow and Jane Mayer published this piece in the New Yorker where a woman came forward saying Kavanaugh had exposed himself to her during a drunken game… This camp has been strengthened and has grown because I think a lot of conservatives looked at that reporting and thought it was unconvincing, shoddy and seemed more obviously sort of ginned up by a search for a second allegation.”

“I think there’s a sense on Capitol Hill that among Republicans they feel like perhaps Democrats have overplayed their hand. They’re arguing that her allegations are thin,” she reported.

Notably, neither Douthat nor Hunt named their sources. The Republican men on the Senate Judiciary Committee are so wary of appearing insensitive to the #MeToo movement that they went all the way to Arizona to enlist a female prosecutor to handle Ford’s questioning.

What might embolden them to go after the new accusers more directly?

Enter Michael Avenatti, the attorney representing Stephanie Clifford, aka Stormy Daniels, in her lawsuit against President Trump. When he introduced Swetnick as his new client on Wednesday, President Trump seized on the occasion to say the fix was in.

“Avenatti is a third rate lawyer who is good at making false accusations, like he did on me and like he is now doing on Judge Brett Kavanaugh. He is just looking for attention and doesn’t want people to look at his past record and relationships – a total low-life!” Trump tweeted.

A Daily Beast headline Monday — “Democrats to Michael Avenatti: You’re Not Helping” — perfectly captured the sentiment that Avenatti’s involvement might be an unforced error. The fear among some Democrats is that Kavanaugh’s defenders might group all the accusers in with the attorney, who has not disguised his antipathy toward Trump in his representation of Daniels.

In an email to TheWrap on Wednesday, Avenatti said the notion that his involvement could actually help Kavanaugh was “complete nonsense and baseless.”

“I get hired because I am effective,” he said.

Trump has also cast doubt on Ramirez — though he showed rare restraint with Ford. “The second accuser has nothing,” Trump said Wednesday. “She admits that she was drunk. She admits time lapses.”

Trump said in a news conference Wednesday that he may change his mind on supporting Kavanaugh, but wants to watch Ford’s testimony.

“I’ve been accused. False accusations. I believe it was four women,” Trump added. He has actually been accused of sexual misconduct by 17 women.

Republican Senate Majority Leader Mitch McConnell is among those who have called the accusations against Kavanaugh part of a “smear campaign,” saying on the Senate floor Wednesday: “Democrats have signaled for months they’d put on whatever performance the far-left special interests demanded and throw all the mud they could manufacture.”

One reason the Times may not have published, however, is that Ramirez did not speak to the newspaper, only to the Times. The Times’ editor, Dean Baquet, said the newspaper was not trying to “knock down” the New Yorker account and said he was “not questioning their story.”

Lou Shapiro, a criminal attorney specializing in crisis management, said Republicans could argue that the timing of Ramirez and Swetnick’s statements this week makes them suspect.

“If you’re looking at it from Kavanaugh’s perspective, it seems to me that whatever the left was missing in their efforts to knock Kavanaugh off, they seem to be able to produce in the last hour,” he said. “It’s like pulling a royal flush when the other side has a full house. This could have a backfiring effect. McConnell is calling this a smear campaign and the timing of the accusations could feed into that narrative.”

Susan Tellem, of Tellem Grody PR, agreed that Republicans could use the timing of the new accusations to their advantage.

“It seems odd that these accusations just happened now,” she said. “It’s another case of he-said-she-said and until we go to trial or there is an arrest, we won’t know.”

Levenson suggested the Senate follow Anita Hill’s advice on Kavanaugh. The law professor who accused Clarence Thomas of misconduct in his Supreme Court confirmation hearing has called for “a fair and neutral way for complaints to be investigated.”

But investigators trying to confirm accusations of sexual misconduct typically look for evidence that an accused man has a pattern with other women. Such testimony was key to the case against Bill Cosby, who was sentenced to state prison this week in the drugging and sexual assault of Andrea Costand.

Suggesting that Kavanaugh is a victim of a too-convenient narrative would be incredibly risky. There could be tremendous blowback, almost as much as Simpson received for his contention that the bloody glove was planted by a racist cop.

It worked for Simpson. But he didn’t have to answer to voters.

Itay Hod contributed to this story.