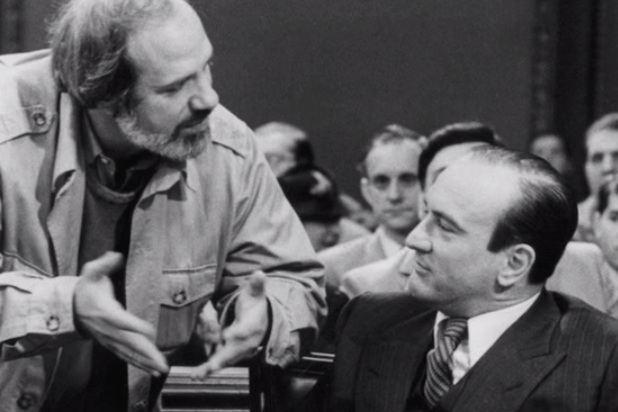 Brian De Palma, left, and Robert De Niro on the set of "The Untouchables"

Based on his classics alone, director Brian De Palma would be the worthy subject of any film. He made “Scarface,” “Carrie” and “Mission: Impossible,” after all.

But a look back at the 75-year-old cinema icon’s impressive filmography is just part of the appeal of the warmly-reviewed “De Palma,” a documentary by Noah Baumbach and Jake Paltrow that opens in select theaters this weekend.

An expansive oral history of the director’s work, De Palma himself sat down with the filmmakers, sharing highlights from his storied career, which has now spanned six decades. His in-depth interview is cleverly interspersed with behind-the-scenes footage, still photos, key film clips, and never-before-seen home movies — including one of Steven Spielberg using his car phone in 1976.

Along with colorful stories about his failed projects and successes alike, a compelling through-line emerges as De Palma recalls rising through the studio ranks with the filmmakers of the hailed New Hollywood: George Lucas, Martin Scorsese, Francis Ford Coppola and Spielberg.

Here are 13 of the best insider stories recalled by De Palma in, ahem, “De Palma”:

1. De Palma — not Scorsese — cast Robert De Niro first.
It would be easy to assume De Niro’s first film role was Scorsese’s “Mean Streets,” which came out in 1973, and marked the actor’s storied run with the director. But the fact is, De Niro appeared in three De Palma films before “Mean Streets,” starting with the 1968 offbeat dramedy “Greetings.”

3. Steven Spielberg had a car phone… in 1976!
In the new documentary, De Palma recalls how Spielberg liked to talk on his car phone. Baumbach and Paltrow unearthed comical footage from the director’s own archive of Spielberg using his phone while driving. The handset was beige, and looked exactly like a landline phone of the era. Spielberg literally says on camera, “It’s 1976!” The “E.T.” director, proving yet again that he was ahead of his time, apparently took to making selfie videos in those days, as seen in this other video of him reacting to the Oscar nominations that same year, when his “Jaws” earned four nominations (and went on to win three Academy Awards).

4. Lucas, Scorsese, Coppola, Spielberg and De Palma were a ’70s posse.
Part of the so called “New Hollywood,” the fledgling filmmakers all launched their careers at the same time in the 1970s, rising through the studio ranks. In the doc, De Palma called his director clique “the Warner Bros. youth group.”

5. “Star Wars” and “Carrie” were cast together.
Oddly enough, De Palma and Lucas were casting the same type of actors for their respective projects — so they combined efforts. Essentially, everyone who read lines for “Star Wars” also read for “Carrie.” De Palma remembered that Amy Irving — eventually cast in “Carrie” — got very close to landing Princess Leia instead of Carrie Fisher.

6. Oliver Stone almost died.
The director, who wrote the “Scarface” screenplay, almost got killed while doing research, De Palma recalled. It was apparently a case of mistaken identity that got Stone in trouble with the criminal element — from whom he was seeking information to plug into his script.

7. De Palma turned down “Flashdance.”
He negotiated an exorbitant pay day only to relinquish the director’s chair to Adrian Lyne. The 1983 hit went on to earn four Oscar nominations, winning a Best Original Song statuette for “Flashdance… What a Feeling” by Irene Cara.

9. De Palma wanted to cast Don Johnson.
The director initially wanted the “Miami Vice” actor in the role of famous Fed Elliot Ness in “The Untouchables.” That was before studio executives steered him toward Kevin Costner.

10. Famous baby carriage scene a bit of a ripoff.
A scene the 1925 film “Battleship Potemkin” inspired the film’s famous, slow-motion fight sequence, staged around a baby carriage descending down a stair case.

11. De Niro wasn’t learning his lines.
The actor wore the same type of silk underwear as Al Capone even though audiences never saw them, revealed De Palma. The director also added a gripe about De Niro forgetting his lines while making “The Untouchables.”

12. Orson Welles didn’t learn his lines, either.
De Palma directed Welles in one of his early films, recalling in the documentary how surreal it was to have to ride the man who made “Citizen Kane” to get him to memorize his lines.

13. Sean Penn taunted Michael J. Fox on “Casualties of War.”
In order to keep the adversarial nature of his character front and center with Fox, Penn would ignore the “Family Ties” star on set and even insult him from time to time. One time Penn spoke into Fox’s ear with a disgusted tone: “Television actor.”

Don’t stop here. De Palma shares much more from his treasure trove of memories in Paltrow and Baumbach’s new documentary.