Brian Stelter was back on CNN on Sunday night – and may be again in the coming weeks – but reliable sources tell us it’s only a temporary glitch.

Stelter was one of many talking heads on “The Murdochs: Empire of Influence,” CNN’s long-ago produced documentary about the media mogul behind Fox News that broadcast its first two episodes Sunday. Originally produced as an original miniseries for the doomed CNN+, Stelter’s involvement assuredly was locked many months before he was fired from CNN and “Reliable Sources” was canceled.

Though Stelter was for years in an open, ongoing public feud with Murdoch’s Fox News, his brief contribution to “Empire of Influence” was surprisingly even-handed – admiring, even?

“Rupert Murdoch just made it easier to see ourselves, to see the conflicts that are inherent in America,” go Stelter’s first comments for the cameras. “Conflicts over race and class and center, conflicts over the very nature of the Democratic system.” 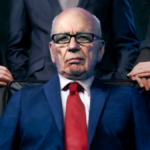 By no means is that an endorsement, but it’s hardly the kind of stinging rebuke you could expect Stelter to lob at a Fox News host during his “Reliable Sources” days.

Though he doesn’t have a large part in either episode, Stelter does have this to say in a teaser segment for an upcoming installment: “Politicians have been sucking up to Rupert Murdoch for decades” (exasperated emphasis his).

And by the looks of how “Empire of Influence” is unfolding so far, that does, in fact, seem pretty reliable.