After an extremely turbulent week at CNN following the departure of network head Jeff Zucker, “Reliable Sources” host Brian Stelter rallied to the defense of his cable news colleagues.

“CNN was not built by just one man, not by only Ted Turner and it was not led only by Jeff Zucker,” Stelter said on Sunday morning. “CNN is so much bigger than any single individual. It is about teams and teams of people, thousands of individuals who make up CNN.”

Zucker’s sudden exit after he disclosed a romantic relationship with CNN chief marketing officer Allison Gollust was met with public and private laments by many of the network’s top on-air talent but with schadenfreude by the network’s critics and some of its former staffers.

In interviews with and texts between former staffers leaked to TheWrap, Zucker was slammed for failing to elevate new talent, making opinion segments from the likes of Chris Cuomo and Don Lemon the center of its primetime coverage, and elevating Donald Trump both as the former head of NBC where he greenlit “The Apprentice” and in his decisions on how to cover Trump during the 2016 presidential election.

“Sure, [Zucker] could be very charismatic,” one former producer said. “But the thing people will never get over is how he elevated Trump. It’s not liberal or conservative, it was all about ratings. He could care less what it would do to the country. That should be his legacy. He delivered four years of a bigot in the White House.” 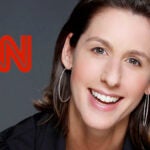 Stelter, meanwhile, defended those who would use Zucker’s leadership to criticize CNN as a whole. Stelter has welcomed criticism of CNN on “Reliable Sources” in the past, with some media reporters openly scolding the network on his show for its handling of Chris Cuomo’s personal involvement in his brother’s attempt to grapple with the scandals that ended his term as New York governor.

“CNN is the executives and it’s the interns and everybody in between who keeps this place running 24/7,” he added, “We lost our leader this week. We’re not going anywhere.”

Watch Stelter’s speech in the clip above.