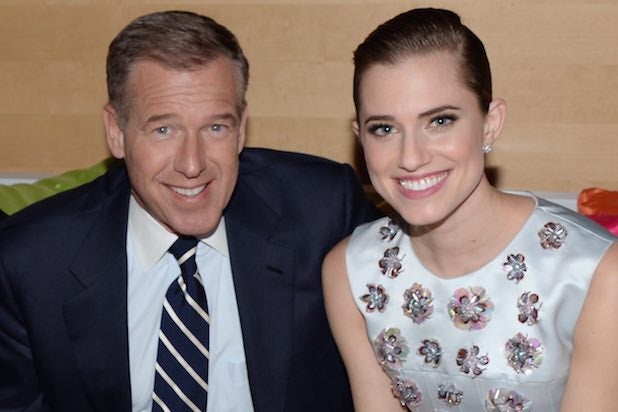 “It’s been tough, though. Obviously, toughest on my dad, who bears the full burden of responsibility for it,” People reports the 24-year-old actress said of the former “NBC Nightly News” anchor’s six-month suspension without pay. “But one thing the experience has not done is shake my trust and belief in him as a man.”

“He’s a really good man. He’s an honest man. He’s a truthful man. He has so much integrity,” Allison continued during a Q&A with Seth Meyers at New York’s 92Y. “He cares so much about journalism. And yes, he’s a really good dad. I know you can trust him because, as any good daughter does, I’ve tested him on that.”

Allison says her family is “lucky” to be receiving such positive support, despite her father’s Iraq War helicopter experience coming under intense scrutiny by the military, media and public.

Also read: Why NBC’s Brian Williams Must Be Held to a Higher Standard (Guest Blog)

“This has been a really hard time. We have also been very lucky, counting our blessings,” Allison said. “We have our health, we have each other. It’s been incredible to experience the outreach from people you love, family, friends, and then people we don’t even know, strangers, just reaching out saying we want him back on TV.”

While NBC Universal CEO Steve Burke said Williams “has jeopardized the trust of millions,” Burke is “rooting for him” to get back on the air, and a CNN/ORC poll released Wednesday showed 52 percent of Americans believe Williams should be allowed back on television.

Williams admitted earlier this month that he was never on a helicopter that was forced down by RPG [rocket-propelled grenade] fire during the initial invasion of Iraq in 2003.

“I would not have chosen to make this mistake,” Williams said in an interview with U.S. military news site Stars and Stripes. “I don’t know what screwed up in my mind that caused me to conflate one aircraft with another.”