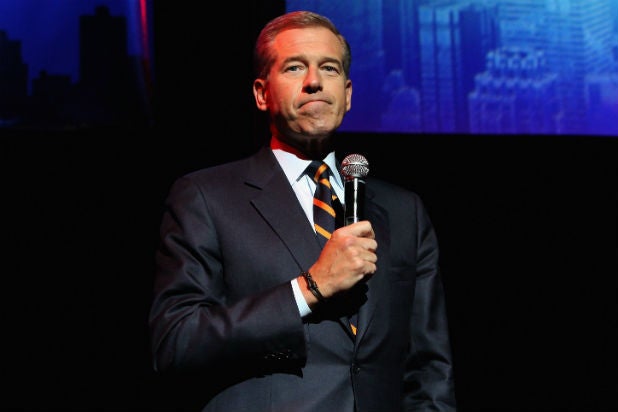 “NBC Nightly News” anchor Brian Williams‘ apology for a false Iraq story in 2003 was not enough for social media.

The hashtag #BrianWilliamsMisremembers quickly trended on Twitter after Williams acknowledged he was never on a helicopter that was forced down by rocket-propelled grenade (RPG) fire.

The trend mocked Williams and credited the anchor for reporting on or being at historic events, some decades or even centuries old.

“I jumped off just in time and saved everyone from drowning,” wrote @gunmaster0702, who attached photo of a sinking Titanic to the tweet.

Other users said Williams reported from the ill-fated Hindenburg disaster in 1937 and superimposed head shots of Williams in the convertible with former president John F. Kennedy moments before his assassination in Dallas.

@Wikia made light of the apology, claiming Williams was Thor.

“Growing up in Asgard was challenging but rewarding. I slayed many beasts,” the account tweeted.

Also read: Brian Williams Apologizes for False Iraq Story Claiming He Was on Helicopter Forced Down by RPG Fire

Over the years, Williams has recounted the story of how he and his crew were shot down by opposition fire for years in both books and written pieces for high profile-publications. The story surfaced again Friday during NBC’s coverage of a public tribute to a retired command sergeant major at a New York Rangers hockey game.

“The story actually started with a terrible moment a dozen years back during the invasion of Iraq when the helicopter we were traveling in was forced down after being hit by an RPG,” Williams said on the broadcast. “Our traveling NBC News team was rescued, surrounded and kept alive by an armor mechanized platoon from the U.S. Army 3rd Infantry.”

Williams change of story came after crew members of the helicopter that actually was forced down told U.S. military news site Stars and Stripes that Williams was nowhere near their helicopter. The anchor was in a separate one about an hour behind them that was not affected by RPG fire, TheWrap previously reported.

That Chinook took no fire and landed later beside the damaged helicopter due to an impending sandstorm from the Iraqi desert, according to Sgt. 1st Class Joseph Miller, who was the flight engineer on the aircraft that carried the journalists.

“No, we never came under direct enemy fire to the aircraft,” the helicopter pilot admitted Wednesday.

That’s when Williams apologized for the error.

“I would not have chosen to make this mistake,” Williams said in an interview with Stars and Stripes. “I don’t know what screwed up in my mind that caused me to conflate one aircraft with another.”

Williams has since apologized to the crew members on the “NBC Nightly News” Facebook page.

Below are some tweets:

“… and THEN have your lawyer say, “If the glove don’t fit, you must acquit!” #BrianWilliamsMisremembers pic.twitter.com/RQQUjrC8a4

Brian ‘Misremembers’ ‘Walking on the Moon’. He really was talking about the Police Song. #BrianWilliamsMisremembers pic.twitter.com/zTz8HcSMJ8

Growing up in Asgard was challenging but rewarding. I slayed many beasts. #BrianWilliamsMisremembers pic.twitter.com/y0UX7E89Ze

“I was a young reporter getting my first big break. I never looked back.” #BrianWilliamsMisremembers @nbcnews pic.twitter.com/KqoZ2wU9Ad — enriquebrao (@enriquebrao) February 5, 2015