All eyes were on MSNBC Tuesday at 3 p.m. ET, not necessarily to see Pope Francis’ historic arrival in the U.S., but to see how Brian Williams would handle his long-awaited return to the anchor desk.

Would he be emotional? Would he address his absence? The answer is no.

“Good day. I’m Brian Williams at MSNBC headquarters here in New York,” Williams said at the top of the hour. “In a short time, Pope Francis will arrive in this country for the first time.” He then tossed to Chris Jansing, who was reporting from Washington.

Also Read: Andrew Lack on Brian Williams' MSNBC Return: 'He Looks Forward to Finding Himself in This Role'

Williams manned the ship as if he’d been there all along, despite not being seen on television for months following the outcry over his exaggerated statements about his experiences in Iraq.

He steadied the channel’s coverage of the Pontiff’s arrival, striking a confident and serious tone, and seamlessly tossing to NBC News correspondents Jansing, Jose Diaz Balart and Maria Shriver.

Wrapping his first day back, Williams simply signed off, telling viewers, “We covered a lot of ground,” then he tossed to the next program.

Williams was suspended without pay from his gig as managing editor and anchor of NBC “Nightly News” in February. 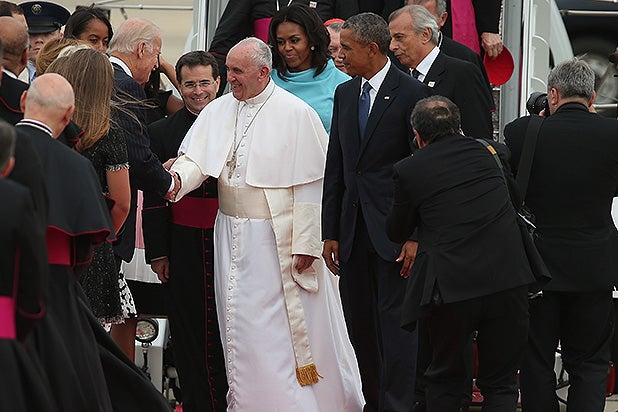 Williams’ return to the air is an opportunity for him to rehabilitate his image and perhaps restore some of the trust he lost for making up details about a 2003 reporting trip to Iraq. NBC News brass hope Williams can help the flailing news channel get out from a ratings rut by focusing on hard news during the daytime.

Over the summer, MSNBC canceled its 3-5 p.m. ET block featuring “The Cycle,” “Now with Alex Wagner” and the “Ed Show,” replacing the shows with straight news. It’s not yet known who will fill those two hours. Williams will definitely anchor breaking news during that span, and Chuck Todd debuts at 5 p.m. in the coming weeks.

The media firestorm that ensued was too much for NBC and Williams’ false statements ended with him being replaced by Lester Holt.