“Bridgerton” wrapped up its second season with another bold Lady Whistledown twist.

(Spoiler alert: This story details major plot points from the “Bridgerton” Season 2 finale, Episode 8, “The VIscount Who Loved Me.”)

At the end of “Bridgerton” Season 2, Lady Whistledown’s identity was uncovered by Eloise Bridgerton. After mounting evidence pointed in the direction of her best friend in the world – Penelope Featherington – one gossipy comment Pen shared at the Featherington ball sent Eloise down a road of crushing discovery. Eloise ripped apart Penelope’s room and discovered an unimaginable amount of cash on hand, and confirmed her suspicion that Penelope is Whistledown.

It was one of the most intense scenes of the season as Nicola Coughlan as Penelope, tried to pacify Eloise (Claudia Jessie), revealing that she threw her friend under the bus to save her from Queen Charlotte (who thought Whistledown was Eloise). But Eloise wasn’t buying it. As the Bridgerton daughter severed the relationship with her she did so by calling out Penelope’s sins, as she saw them, as Whistledown, including revealing Marina Thompson’s pregnancy (in Season 1), embarrassing Colin Bridgerton (with that reveal), and giving Eloise advice that made her break things off with printer shop clerk Theo.

The morning after Coughlan watched the finale for the first time, she spoke with TheWrap, diving deep into the incredibly intense “Bridgerton” moment that broke all our #Peneloise hearts.

TheWrap: Tell me about filming the scene with Claudia where Eloise is ripping up your room. That was such a charged scene. She knows her secret, and it ends the friendship.

Nicola Coughlan: It was so stressful to film that. When we did the readthrough we did it over Zoom. And I cried. I was like ‘Ohhh, God.’ And then, on the day, I was really stressed about it because also, we had a mini-fight in Season 1, and that was like nothing in comparison to this. But we always knew that this was coming. We didn’t know for sure it was coming at the end of this season because we didn’t get all the scripts at once. But we certainly felt like it was headed that direction. … It was just horrible. It was really horrible because Penelope’s so used to keeping secrets, but then when she gets confronted with the ugly truth, she doesn’t know what to do. She’s just been called out massively and she is in the wrong in so many different ways. But then Whistledown, she loves it. She loves it. It’s [the] driving force in her life. It’s her independence. It’s her way of expressing herself. And she gives it up for Eloise and she goes to Eloise, like, ‘I gave it up for you and you don’t even appreciate it.’ It’s not, you know, the greatest reaction in the world (laughs).

I think she’s someone who has been hurt a lot in her life. They say hurt people hurt people and then she just goes for the jugular with Eloise and it was just horrible. It’s just horrible. But also, I think probably very true and how that would have unfolded. But yeah, to film – it was crazy. It was really stressful and really upsetting. It took a lot out of me. And Claudia and I were like, ‘We have to hug a lot today,’ because we’re deeply invested in their friendship and we don’t want them to argue. We don’t like it. 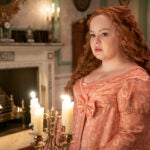 Have they told you anything about the third season in relation to those two, because it looks like that’s going to be – I mean, they can’t be friends at the start of the season. I can’t even imagine that happening.

It’s horrendous fallout. It’s so bad. It’s the worst it could be and also then, the levels of betrayal that Penelope is committed – I mean, Eloise is her main source of information when you think about it. Eloise is within the most powerful family in the ton, so she has access to all these stories and just tells Penelope freely and then she’s going to, you know … the knock on effect is going to be horrendous.

Penelope picks up her pen again at the end of the season. Obviously this is after she overhears Colin basically say, ‘Yeah, there will never be anything between us.’ She just lost her best friend. The new Lord Featherington turned out to be a fraud and is going away. What is driving her to pick up the quill?

I think the reason she does it is because it’s rock bottom for her. The only reason she gave Whistledown up is because she loves Elouise. She didn’t want to write what she wrote about her but felt like it was her only option to save Eloise. It’s just like a whole mess of a situation and also, what comes from someone keeping secrets and not confiding, and then trying to figure out themselves but not having the headspace in which to do it. And then I think she goes down out of the party to try and – to find Eloise. Because she’s never gonna be able to fix it immediately. There’s too much hurt, too much betrayal, but then hearing Colin go, ‘Yeah, that’s never gonna happen,’ that’s like the final nail in the coffin. The two people she cares most about in the world – she’s lost, in that moment. And I think what sparks her to do that is she goes, ‘No, this is – I have nothing I’m gonna have this thing. This is my thing. And I know how to do this amazingly and it’s my power and it’s my everything I’m getting it back.’ But, hilariously, I watched it for the first time last night and I had totally forgotten about the voiceover and I got such a shock. I was like, ‘Oh my God! Yeah, it’s me.’ I’d 100% forgotten and I got chills at the end. I was like, ‘Ooh, oh God.’ It made me very excited for next season actually. 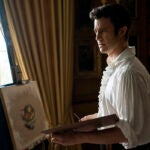 I know. Do you think that she would ever confront Colin about what he said? She’s loved him her whole life and he’s such a good guy. And he hasn’t yet realized what a diamond she is.

I think what happened, her hearing that, is a good thing in a roundabout way because she idolizes him sort of too much. She thinks he’s perfect. And if they’re ever going to have a relationship, he can’t be this Adonis/god perfect person. She’s got to see he’s human and has flaws. So I think it’s good to like, knock him down a peg or two in her estimation, and she also needs to realize her worth and that she can’t – she’s so lovesick over him. Everything he does, she’s like, ‘It’s just just great,’ and ‘You’re going to have your purpose,’ and ‘You’re going to be wonderful.’ And she would support him to the ends of the Earth, but she’s got to see him as a human being before she could ever – before he could ever see her, I think, in a romantic way. But I think – yeah, I’m so interested. And I’ve seen absolutely nothing of next season. I know certain things that are gonna happen, but literally everything else. I’m speculating. But, when I watched the finale last night, my head today has been really full of like, ‘Oh my God. What is going to happen?’ (laughs)

To close this out, I’m going to end this interview by asking you what you think would happen if your character and Polly [Walker’s] character Lady Portia Featherington – your mum on the show – did family therapy?

I’m always really interested in the connection between Penelope and Portia because I think there’s a lot of Portia in Penelope that Penelpoe would never realize. It’s the thing that we all go, ‘Oh, well, we all turn into our parents.’ But I think that snap back she has at Eloise is pure from Portia. And also the fact that I think there’s a lot of Portia in Whistledown as well, you know, acerbic, cutting, gossipy – that’s totally her. Penelope would be like, ‘I’m nothing like the rest of my family.’ I’m like, ‘Yeah, you are.’ Polly and I talked about this and Polly said that she thinks Penelope is actually her favorite child, but she doesn’t sort of know how to express it. And also, I think Polly, especially in the finale, I love that final scene with her because I think it’s – it’s so well written and Polly performs it so brilliantly. Portia is someone who has so many huge responsibilities and has been left adrift by two different men. And you see that everything she does is for her daughters. And yeah, she’s not as perfect as Violet Bridgerton. She’s not as much of a, you know, a warm, loving figure, but she does it all out of love. I think Penelope also is young and doesn’t think about that at all. That would be a long therapy session.

“Bridgerton” Seasons 1 and 2 are streaming now on Netflix.