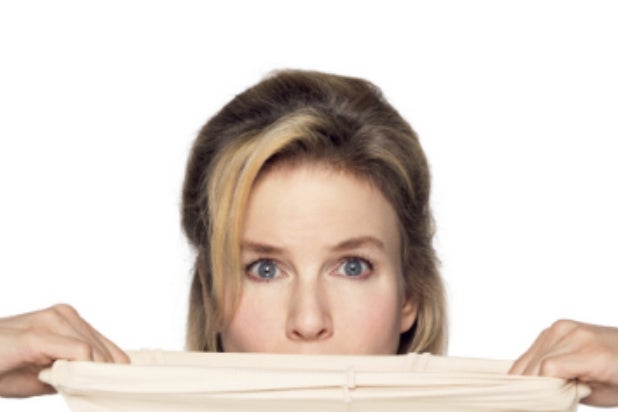 Forget all that stuff about Renee Zellweger‘s face — she still delivers choice comic expressions and re-creates a much loved, lived-in character.

Yes, Bridget Jones is back and — I’m sure this isn’t a spoiler — this time she’s having a baby. The problem, the big comedy situation, is that she doesn’t know who the father is. It could be handsome internet dating billionaire Jack Qwant (played by dishy American Patrick Dempsey), whom Bridget meets at a Glastonbury-type music festival when this Prince Charming pulls her welly from a quagmire.

But it could also be Bridget’s perennial crush, Mr Mark Darcy, played as ever by Colin Firth. He’s now a hugely successful barrister whose current big case is defending the freedoms of a persecuted Russian girl group called Poonani.

Bridget, now a 43-year-old, high-flying though ridiculously inept and lonely TV news producer, has slept with both of these men within days of each other. When she can’t squeeze into her skinny jeans, she discovers she’s pregnant.

Some very British and very funny high jinks ensue, with key ingredients from the Working Title British Rom Com Handbook all whizzed up in a nutri-bullet of a script from Helen Fielding, with help from Dan Mazer and Emma Thompson.

There is a lot of swearing, as well as “bonking,” “shafting” and the zinger of Emma Thompson saying “fart.” Even the kids are at it. A six-year-old shouts to Bridget across a mandatorily cute country church: “Where the f— were you?”

All this is part of some strange kind of Brit-com legacy, stretching all the way back, of course, to that opening of “Four Weddings and a Funeral.” Speaking of Hugh Grant, he’s not in this one, although his Daniel Cleaver character does haunt the opening scenes, like a sexually rampant ghost.

But mostly, the whole gang’s back together, on screen as well as off. Besides writer Fielding, original director Sharon Maguire returns. Bridget’s reassembled friends include Sally Phillips as Shazza, James Callis as gay personal trainer Tom, and Shirley Henderson as Jude. They’re sketchily drawn but they serve their purpose well, which is now mainly to have christenings and family events so singleton Bridget can come along as the nominated Godmother and self-appointed “spinster” and get herself in drunken trouble.

With all her old chums occupied by life’s responsibilities, Bridget has a new friend, Miranda the presenter at Hard News, nicely played by Sarah Solemani. Their relationship occasions the film’s most successful comic set-pieces, which mostly involve calamities live on air, such as an incident involving interviewing a Chinese chauffeur instead of a Korean dictator. (The moment was based on an infamous real-life BBC News mishap.) There’s also a brilliantly timed episode featuring Bridget’s personal Google browsing history during a power point demonstration.

Of course, there’s the traditional climactic cross-town dash, this time to get to the hospital in time. It’s been a while since Working Title had this kind of mojo, and one is reminded how polished and potent a comic recipe it can be.

Maguire as director maintains a lively comic pace and although some of the gags and set-ups have a distinctly sitcom feel, and the famous old diary has been unsatisfactorily replaced with a vague blog-type tablet device, Zellweger continues to give a bravura comic performance as Bridget.

Even if there’s not much room for any pathos here, this still feels like a real person who cries and bruises and loves. She’s a woman gamely surviving the pitfalls and pratfalls of her own desperation and insecurities, and Zellweger creates a hugely sympathetic character, whose English accent rarely falters and whom every member of the audience will wish well, and cheer all the way up the aisle.