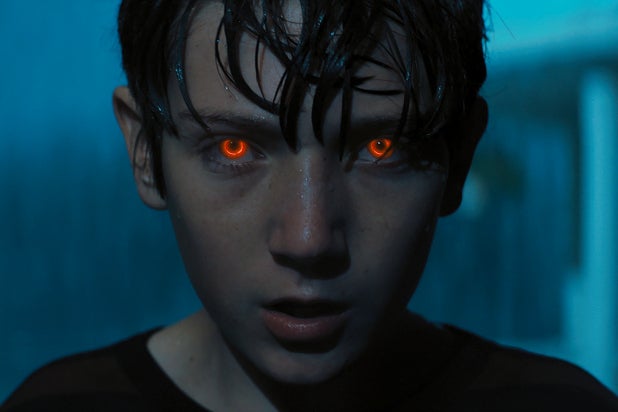 What if Superman started out evil? And what if that was the only idea you had for your movie? Hence “Brightburn,” a wafer-thin exercise in a supposedly new genre called “superhero horror,” but what is really just a body-count flick haphazardly grafted onto a tweaked version of Superman’s origin story — except this version’s isolated farm boy with indestructible (and destructive) alien powers would rather lift a car not to rescue someone but to kill a grown-up who wasn’t nice to him.

The movie is directed by David Yarovesky, but the hyped name is producer James Gunn, the acclaimed if controversial commander of the snarky-sincere “Guardians of the Galaxy” Marvel franchise, but also the mind behind nasty exploitation fare like his black-humored 2010 indie “Super.” That acquired-taste riff on hero notions featured a power-free vigilante, ultraviolence and not much pleasure, but it’s a satiric gem compared to “Brightburn,” which seems especially ill-equipped to please either horror aficionados or even a caped-crusader fandom hungry for variations on the theme.

Like the cynically violent “The Belko Experiment” he produced a couple years back, Gunn is eager to keep one foot in the muck of bad-boy genre movies while he pleases Team Marvel, but his impresario chops aren’t on the same level as his well-proven ability to liven a blockbuster with rascally charm.

“Brightburn” is the sleepy rural town in Kansas where loving farmhouse couple the Breyers — Tori (Elizabeth Banks) and Kyle (David Denman, “Logan Lucky”) — enthusiastically raise their only child, Brandon (Jackson A. Dunn), a good student, curious kid and picked-on outsider at school. Of course, we’re waiting for the connection between the prologue that depicted a mysterious crash on the family’s property ten years prior, and present day 12-year-old Brandon’s occasionally zombielike fixation on a locked trap door in the barn. But we know it has something to do with the fact that he can bend fork tines with his mouth, stop whirring lawnmower blades with his hand without showing a cut and occasionally hover above the ground.

It takes a while before the screenplay — by Gunn cousins Brian Gunn & Mark Gunn — lets us in on the fact that mom and dad know their kid is different, as in hasn’t-ever-bled different, and why he might be that way. It’s unclear why you’d keep potential drama like that from the audience, but so be it. In any case, like the Kents, we find that the Breyers idealistically believe Brandon was made for great things, as only an infant from space could be, right? But Brandon’s reaction to the news that he’s adopted and special is more of a psychopathic stew of rage, calm, deceit, visions of grandeur and, finally, bloody vengeance.

But for all the grim build-up with our prepubescent subject donning a blood-red cape, emitting glowing eyes and targeting everyone from a schoolmate’s waitress mom to his own school-counselor aunt (Meredith Hagner, “Search Party”), the simple fact is we really don’t need to talk about Brandon, because he’s pretty unremarkable as whatever you want to call him: devil child, rotten avenger, alien spawn. Dunn, a servicwably average-looking boy with a serious face, is barely given a chance to develop a gradual eeriness before special effects, ho-hum horror direction (first he’s there, then he’s not!) and uber-gore take over.

One thinks of evil-kid classics — “The Bad Seed,” “Village of the Damned,” “The Omen” — but the care given to make their pint-size villains deliver the total creeps is completely absent from “Brightburn,” which shows more patience for a sliver of glass in someone’s eye or a mangled jaw than for the surely viable dramatic terror of watching your beloved boy become a monster.

And without scenes from the younger years of a mom and dad grappling with the oddness of their child, there’s little weight to the motions Denman and Banks go through as the stricken parents. It’s especially regrettable in Banks’ case, since she was so good under Gunn’s direction in his gross-out lark “Slither” and is better than Yarovesky’s direction and the choppy editing by Andrew S. Eisen and Peter Gvozdas treats her as she switches jarringly from love to denial to fear. Even cinematographer Michael Dallatorre’s frequent chances at evocative lighting in remote places is hamstrung by the mood-killing restlessness.

It’s also unclear whether this is all supposed to be a blood-soaked goof or a “Chronicle”-like adolescent potboiler or just a straight-on fright night. But while we can perhaps be grateful that the superficiality of “Brightburn” probably kept it from opting to exploit elements of disturbed-kid narratives that have been all too common in our more tragic news stories, what remains is still never terribly entertaining as either popcorn or a bent take on superhero myths.