The current surge in COVID-19 cases driven by the omicron variant continues to take a toll on Broadway. The latest victims of COVID-related shutdowns: The revival of “Waitress,” and the acclaimed spoken word/poetry hybrid “Thoughts of a Colored Man.”

With music and lyrics by Sara Bareilles, “Waitress” was originally scheduled to run through Jan. 9 at the Ethel Barrymore Theatre. But all future performances were canceled after several cast and crew members tested positive for COVID-19.

“It has been such an honor to bring Waitress to Broadway. We feel so blessed to have been able to continue playing when Broadway returned in September of this year. We are heartbroken that the Covid virus won’t allow us to finish our glorious scheduled run,” Bareilles said in a statement. 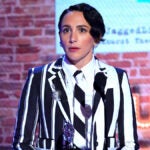 Written by Keenan Scott and directed by Steven H. Broadnax III, “Thoughts of a Colored Man” opened on Oct. 13 at the Golden Theatre, and saw 13 previews and 79 performances.

“While this is not the outcome we had hoped for, being part of this historic season on Broadway has been the greatest privilege of our lives. The theater industry’s great return is about so much more than the success or failure of any single production,” producers Brian Moreland, Ron Simons, Diana Dimenna, Kandi Burruss, Sheryl Lee Ralph and Samira Wiley said in a statement. “As a community, we remain undeterred , unflinching and unstoppable. We have never been prouder to be theater makers than at this very moment.”

The closures of “Waitress” and “Thoughts of a Colored Man” come four days after “Jagged Little Pill,” the musical based on the songs of Alanis Morissette, closed permanently after several positive COVID tests among the cast and crew.