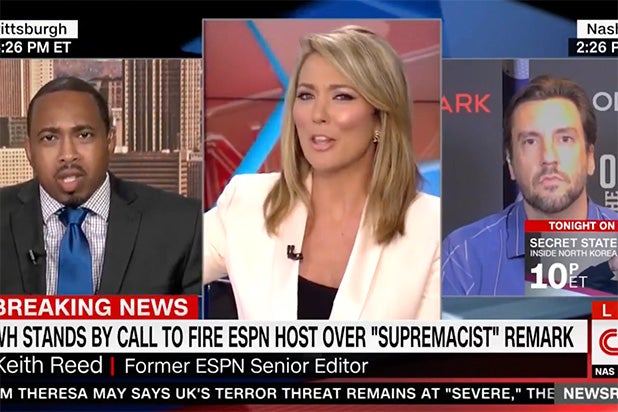 CNN anchor Brooke Baldwin shut down a segment discussing the backlash against ESPN’s Jemele Hill on Friday after one of her guests started talking about “boobs” on the air.

Baldwin had former ESPN editor Keith Reed and sports talk show host Clay Travis on her show on Friday to discuss the outrage surrounding Hill, and was caught off guard when Travis stated that he only believes in “the First Amendment and boobs.”

After he was asked to clarify, Travis doubled down on his statement, assuring her that he was in fact talking about women’s breasts.

“Two things that never let me down, the first amendment and boobs,” he said. “Those are the two things I believe in absolutely in the country.”

Both Baldwin and Reed seemed upset by the comments, with Baldwin asking him why he would talk about the subject on a live television broadcast hosted by a woman.

“I say it live on the radio all the time, because it’s true,” Travis responded.

“Forgive me,” she said. “Live television happens and you think you heard something, you are not sure and then you realize it happened, so I apologize for him on that.”

She later addressed the situation on Twitter, writing “Note to men — that is never okay.”

Video: Here's more of that @CNNNewsroom segment that flew off the rails w/mics cut after Clay Travis said he believes most in #1A & #Boobs pic.twitter.com/xB7Gko5fKB

That was… I just… it was one of those thought bubbles "did he actually say that on MY SHOW?!" Note to men — that is never okay. #smh

Just went on @cnn and said I only believe in two things completely, the first amendment and boobs and the host lost it. Need video now.