Even when its manipulations segue from button-pushing to two-fisted button-mashing, “Brooklyn” weaves an old-fashioned tale that’s well nigh impossible to resist.

As the child of immigrants myself, I could feel my strings being plucked by this tale of a fair Colleen from Ireland finding love and fulfillment in the New World, and it’s certainly a compliment to director John Crowley (“Boy A”) and screenwriter Nick Hornby (adapting the novel by Colm Tóibín) that the film calls to mind Steven Spielberg and even John Ford in its willingness to commit to the grand gesture.

This is sweet, sentimental filmmaking of the old school, but it’s too sincere to get sticky. If “nice” isn’t the kind of adjective to put you off a movie, you’ll probably enjoy “Brooklyn,” even if you’re occasionally aware of its masterful manipulations.

See Video: Saoirse Ronan Gets Caught Between Ireland and America in 'Brooklyn' Trailer

Saoirse Ronan, continuing her skillful onscreen transition from adolescent to young adult, stars as Eilis, a young woman who relocates to America in the 1950s, not out of any burning desire to leave Ireland but because she has little to no professional or romantic prospects in the small town where she lives with her sister and her mother.

Sponsored by a New York-based Irish priest (Jim Broadbent), Eilis crosses the ocean, battling seasickness and homesickness along the way.

At first, Eilis feels utterly alone, even in the boarding house where she and four other girls live under the watchful eye of Mrs. Kehoe (Julie Walters). Eilis grows more comfortable with her new home when she starts taking bookkeeping classes, and especially when she meets Tony (Emory Cohen, “Smash”) at a Knights of Columbus dance. (He’s Italian, but he’s got a thing for Irish girls.) Soon, he’s walking her home from night school and sweeping her off her feet in a chaste, adoring courtship.

Eilis’ improved attitude shows in her job as a shopgirl — her supervisor, Miss Fortini (Jessica Paré, “Mad Men”), tells her that if she’s met an Italian who doesn’t talk her ear off about baseball or his mother, he’s a keeper — and the couple start making plans together, including his dreams of building houses in the bucolic, far-off land known as Long Island. 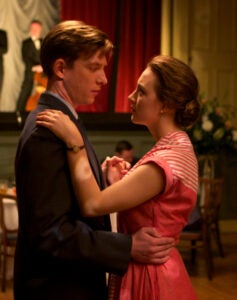 When a death in the family sends her back to the old country — a place that suddenly offers up not only gainful employment but also the handsome, rich and unattached Jim Farrell (Domhnall Gleeson of “Ex Machina,” looking unrecognizably preppy) — Eilis must choose between her old home and her new one. It’s a decision that never feels contrived; the story offers up no villains, and the character is never painted into a corner where only one choice would make sense.

Ronan’s big, clear eyes take us right into this character, from her trepidation and sadness to the exuberance of being in love and the excitement of limitless opportunities in post-war America. She generates such lovely chemistry with both Cohen and Gleeson that “Brooklyn” offers genuine suspense as to which partner, and which path, she’ll choose.

Broadbent and Walters effortlessly steal their few scenes, and Paré digs into a wonderful character part, one that allows her to purposefully glide in and out of the frame as though she were on casters. She’s the kind of glamorously imperious boss who’s both a role model and a terror to anyone reporting to her.

Crowley (aided, no doubt, by an army of digital wizards) re-creates the 1950s with skill, reminding us of shades of green, blue and orange that never existed in any other decade. Brooklyn itself — crowded with immigrants seeking new lives — blossoms as Eilis and Tony fall in love, and the movie makes this urban setting positively swoon-worthy.

It’s easy to fault “Brooklyn” for its starry-eyed naïveté, but even if that’s a tone that doesn’t work for you, there’s no denying that the movie accomplishes what it sets out to do. Big-hearted and utterly unironic, it’s a perfect bonbon for moviegoers who don’t mind a little extra blarney in the mix.