Do we have another surprise late contender ready to join “Crazy Heart” in some major Oscar races? The next couple of weeks will tell the tale, but at the moment director Jim Sheridan’s “Brothers” is starting to look as if it may become a legitimate player.

On Sunday afternoon, the military-themed film, which is based on Danish director Susanne Bier’s award-winning 2004 movie “Brodre,” screened for members of the Directors Guild at the DGA Theater on Sunset Boulevard. The next day, the Envelope’s Pete Hammond (who moderated the post-screening discussion with Sheridan) posted an item wondering why no Oscar bloggers were talking about the film — whereupon Hollywood Elsewhere’s Jeffrey Wells quickly pointed out that Lionsgate hadn’t screened the film for the folks Hammond was chiding. 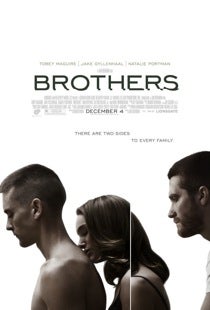 (For a film that hasn’t been finished yet, like “Nine” or “Avatar,” a scarcity of screenings isn’t necessarily a warning sign; for a film that’s been in the can for a year, as “Brothers” has been, it can be a red flag.)

But the DGA screening has apparently set in motion a string of events that will culminate in next week’s launch of a full-fledged best-picture campaign for the film, and a best-actor push for star Tobey Maguire, who plays a soldier presumed missing in Afghanistan until he returns home to his wife (Natalie Portman) and younger brother (Jake Gyllenhaal).

To hear producer Ryan Kavanaugh tell it, the filmmakers proceeded cautiously because of uncertainty about the new landscape for Oscar campaigning. “With the change in Academy policy, we really wanted to let the film speak for itself before we made the decision whether or not to campaign,” he says. “If it got the momentum it needed once we showed it, we would do everything we could to support it as much as we can. And it certainly seemed to get that momentum.”

Others at the Sunday screening say that the film was followed by an enthusiastic ovation rare for the DGA, and a well-received 45-minute Q&A session in which a common theme was questioners wondering why the film didn’t have a higher profile in the awards race.

Between the raves from the DGA (as a group, a fairly accurate Oscar precursor) and positive comments from a few critics who’d seen the film, Sheridan’s camp reportedly decided a full campaign was in order. Lionsgate was in the thick of its campaign for Oscar frontrunner “Precious,” and was said to be surprised that the “Brothers” filmmakers suddenly wanted to shift into Oscar mode as well – but the company quickly agreed to do so.

A full slate of screenings begins next week, with Academy-geared television spots to follow. Lionsgate’s awards website now promotes the film in a wide range of categories including best picture, best director, best actor, supporting actor and actress, screenplay, and song for U2’s “Winter.”  The song certainly sounds apt (“The broken and the bruised/The young and the used/The sure and confused/All here”) — and while Kris Tapley speculates that the track may run afoul of the music branch’s strict rules because it was recorded during the band’s "No Line on the Horizon" sessions, Kavanaugh says that it was "without question" written specifically for the film.

CORRECTION: The original version of this post incorrectly stated that the "Brothers" DGA screening took place in the evening, not the afternoon.  Also, I’ve since been told that Jim Sheridan received an enthusiastic reception, but not a standing ovation.