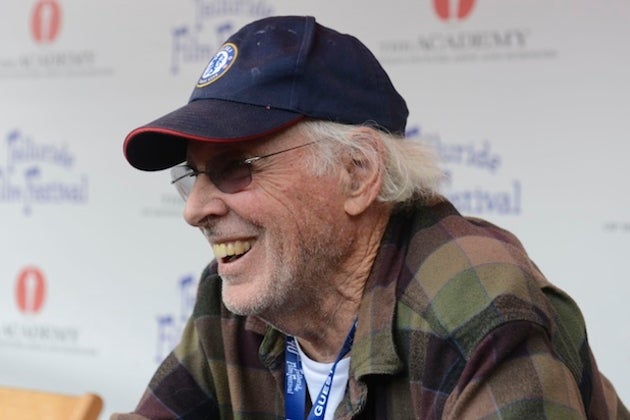 The international community may have liked it well enough at Cannes, but Colorado really, really loves “Nebraska.” In its four screenings in Telluride, Alexander Payne‘s film has proven as beloved and buzz-prompting as anything at the fest – and that’s saying something in a weekend that’s also seen attendees almost universally rapturous over “12 Years a Slave” and “Gravity.”

Even against slavery and space epics, the heartland has a fighting chance after all.

Bruce Dern won best actor at Cannes for “Nebraska,” and some Telluride-goers are convinced it’ll be a two-man Oscar race between him and “12 Years” leading man Chiwetel Ejiofor. You could hardly imagine two different actors or roles, and voters may face an impossible choice between boosting a face of the future or rewarding an unlikely valedictory triumph.

At a Sunday panel in Telluride’s downtown park, Dern talked about how Payne came to him early in the filming and told him, “Let us do our jobs!” The director’s blunt message was that Dern should dial it down while playing a highly cranky, highly vulnerable, borderline-doddering dad who mistakenly thinks he’s won a million bucks in a magazine sweepstakes.

As Dern related it, Payne told him to stop trying so hard to give a performance. “That’s what we did,” Dern said. “The risk for me was to trust myself that I could be interesting enough to leave myself the hell alone…

“So you push, and you act, and at times you pretend. I got tired of doing that when I met Alexander and I said, ‘I just want to be a human being.'”

But Payne cheerfully saluted Dern’s outsized persona when he introduced the actor at Sunday night’s screening. “I wish to point out that we have with us tonight Bruce Dern,” the director said. “So if you enjoy or not enjoy or whatever his performance, he’d be only too delighted to say hi to you after the screening.”

Payne also talked about the extended gestation for “Nebraska,” telling the audience at the Werner Herzog Theatre that Bob Nelson’s screenplay had first come to him through the producers of “Election” nine years ago.

(As an aside, he noted that “Election” is “still my mother’s favorite among my films. When she saw this one, she said, ‘Yeah, it’s okay — why can’t you make one more like ‘Election’?'”)

“Nebraska” is Payne’s sixth feature – and, he said, the one on which he did the least amount of writing. “I did some rewriting on it, to be sure, but I did not originate it nor did I seek screenplay credit on it.

“It’s really the vision of the screenwriter I was fulfilling. He’s a guy I had never heard of nor do I know much about, though I’ve met him and he’s an extremely nice guy. His name is Bob Nelson, out of Suquamish, Washington, which I’d heard of only from Bob and Ray routines. He used to spend summers back in Hartington, Nebraska — population about 1600 — and he wrote this screenplay based on memories of those summers with his father and his father’s seven brothers back there.”

So why’d a script this swell take almost a decade to get off the ground? “It’s a road movie to some degree, and I didn’t want to follow up ‘Sideways’ with another road movie,” Payne explained, expressing “gratitude toward the screenwriter and the producers for their patience in waiting for me to get some other stuff out of my system before circling back around to it.

“But Bruce Dern is the right age and the right temperament now. And whatever’s happening in the culture at large, the winds of culture blowing though the film, worked out fine.”

Sunday was the one day of the festival not to boast any world or North American premieres, but Monday, which is traditionally the cool-down day, brings an intriguing one in the form of “Salinger,” a much-hyped documentary that hasn’t even screened yet for the press, despite the fact that it opens on Friday.

The Weinstein Company, which has had a lower-key presence at Telluride in recent years than rival boutiques like Sony Classics, is bringing in “Salinger” for the highest-profile last-minute bow possible. Weinstein also made news Sunday by announcing the company had picked up “Tracks,” a picturesque historical drama with Mia Wasikowska crossing the Australian outback. The film made tracks to Telluride Saturday following its world premiere in Venice just a day earlier.