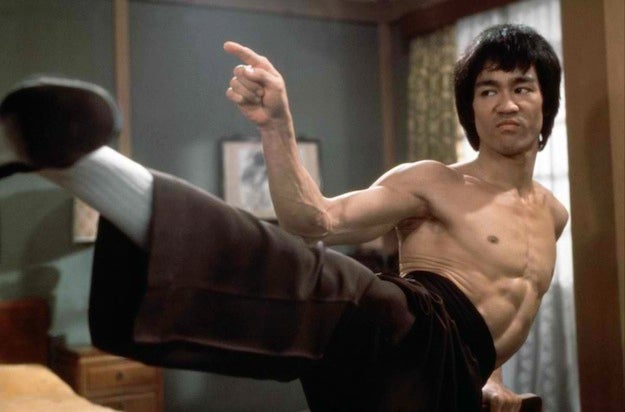 I’m a short, skinny looking girl with twig like arms and baby fat cheeks, so he last thing people would associate me with is being a martial artist. More likely, when the words “martial artist” are uttered, the image associated is an old Asian grandmaster that can kick serious ass, or the “Bruce Lee” hero type. Which is why I was surprised to learn that Bruce Lee fights like a girl.

When I first arrived in L.A., I joined a school-run drop in class for stage combat. There, I met stunts coordinator Jack C. Huang, who would later become my mentor or what we call “sifu.” While the class is intended for stage- or film-based stunts, Jack would also teach us the traditional movements of Tai Chi, Taekwondo and most notably Wing Chun.

What intrigued me most about Wing Chun was how well it coincided with my own movements — the gracefulness I had from being a ballerina, plus the speed of my slim figure. Almost like it was a fighting style intended for me.

According to the Asian folklore, Wing Chun dates back two centuries with the burning of the Shaolin Temple by the Qing Dynasty soldiers. Among the 5 monks who escaped was Buddhist nun Ng Mui, a master of Shaolin Kung Fu. While running from the disaster, she came across a peculiar scene of a crane battling a snake. Inspired by their quick and deadly movements, Ng Mui began structuring a new form of martial arts.

Modeled after three basic movements: Tan (?’?手), Bong (膀手), Fuk (伏手), Wing Chun utilizes speed, precision, and the 50/50 ideology: Every strike can be blocked and every block can be struck. Wing Chun is ideal for close combat as it uses the strength of your opponent against them and responses based on the attack you receive.

Ng Mui soon took refuge in a nearby town on Mount Tai Leung. There she would frequent a small stand selling bean curd run by Yim Yee and his daughter Yim Wing Chun. Legend says that Yim Wing Chun was a beautiful young woman, and her beauty attracted the attention of local boys in the area. One of whom was persistent in getting her hand in marriage and would bully and continuously threaten the girl and her family.

When Ng Mui found out, she offered to teach the young girl Kung Fu in order to protect herself and her family. Yim Wing Chun agreed and would train day and night to master this new form of Kung Fu. When the time came, she challenged her persistent bully to a fight and won.

Years later, Ng Mui left the small town and left Yim Wing Chun with her creation, naming it after her first student, Wing Chun. She asked Yim Wing Chun to honor the traditions of Kung Fu and to develop the technique after her marriage and pass it down only to the worthy students. Yim Wing Chun kept her promise and eventually taught her husband Leung Bok Chau who in turn, passed it down to Leung Lan Kwai, Leung Lan Kwai and Wong Wah Bo.

Through Wong Wah Bo, the technique made its way into the Chinese opera group in Foshan, Guangdong known as the Red Junk Opera. For practice, the actors would use logs of wood they found on the ship to build a dummy. This training doll model would become the wooden dummy we recognize today in many films and training studios.

The story of Wing Chun continues as Chinese opera actors passed the skills to a young man named Leung Jan. Leung Jan would later become one of the most widely recognized martial arts masters and claim the title “The Wing Chun King.” Leung Jan had a reputation as a righteous man and would later become a respected teacher of the Wing Chun technique. His known students include his sons Leung Bik, Leung Chun, Le Wah and Chan Wah-Shun.

As the Wing Chun lineage expands, Leung Jan’s student Chan Wah-Shun would go on to teach a 12-year-old boy named Yip Man, a name that many martial arts participants and fans today recognize. Yip Man’s story attracted the attention of major film production companies who would go on to make blockbuster films such as the “Ip Man” series starring Donny Yen and “The Grandmaster” starring Tony Leung and Zhang Ziyi.

In Foshan, where he was born and raised, Yip Man had been known to give private martial arts lessons. But when the war broke out and the Chinese Communist Party came into power, many grandmasters, including Yip Man, fled to Hong Kong. There he opened his own Wing Chun school. Among his students is the 13-year-old Li Xiao Long, who would later be known in America as the legendary Bruce Lee.

Although I pride myself in being good at martial arts, I am far from mastering this ancient fighting style. But what motivates me to keep practicing is a little-known secret: that my own “sifu,” Jack Huang, is the grand-student of Bruce Lee, which would make me the great-grand student of Bruce Lee.

Yes, Bruce Lee’s iconic fighting style, Wing Chun, was developed by a woman, intended for a woman and named after a woman. How’s that for female empowerment?

View In Gallery
BIO Natasha Choi
Natasha is an actor, filmmaker, stunt performer and student at the New York Film Academy in Los Angeles studying for her BFA degree in Acting. A native of Toronto, Natasha trains under Jack Huang in a variety of martial arts including Taekwondo, Tai Chi, Wing Chun, as well long stick, nunchucks, and samurai sword techniques.

Natasha is an actor, filmmaker, stunt performer and student at the New York Film Academy in Los Angeles studying for her BFA degree in Acting. A native of Toronto, Natasha trains under Jack Huang in a variety of martial arts including Taekwondo, Tai Chi, Wing Chun, as well long stick, nunchucks, and samurai sword techniques.