The Season 4 premiere of “Better Call Saul” had all the tension, heartbreak and intrigue we’ve come to love from Jimmy McGill and his wily friends. But what haunts us most about the episode is the breakroom debate between two Madrigal employees: Who would win in a fight between Bruce Lee and Muhammad Ali?

Since we first saw a preview of the (excellent) episode a few weeks ago, we’ve asked ourselves difficult questions: Street fight? No weapons? What was Muhammad Ali’s weight advantage? And then we remembered something important: We know Bruce Lee’s biographer. His name is Matthew Polly, and he’s cool, and we spoke to him in June for our “Shoot This Now” podcast, which you can listen to on Apple or right here.

OK. If you’ve listened to the podcast, you now know some weird stuff like how Roman Polanski briefly suspected Lee in the Manson murders — and that Lee broke down racial barriers not just for Asians, but African-Americans as well. You probably want to buy Matthew Polly’s magnificent book, “Bruce Lee: A Life.”

Three-fourths of the way into the “Better Call Saul” Season 4 premiere, the debate breaks out. One Madrigal employee, played by Bechir Sylvain, astutely tells a co-worker: “I don’t care how fast you are. Muhammad Ali hits you, you’re going down. That’s a fact.” 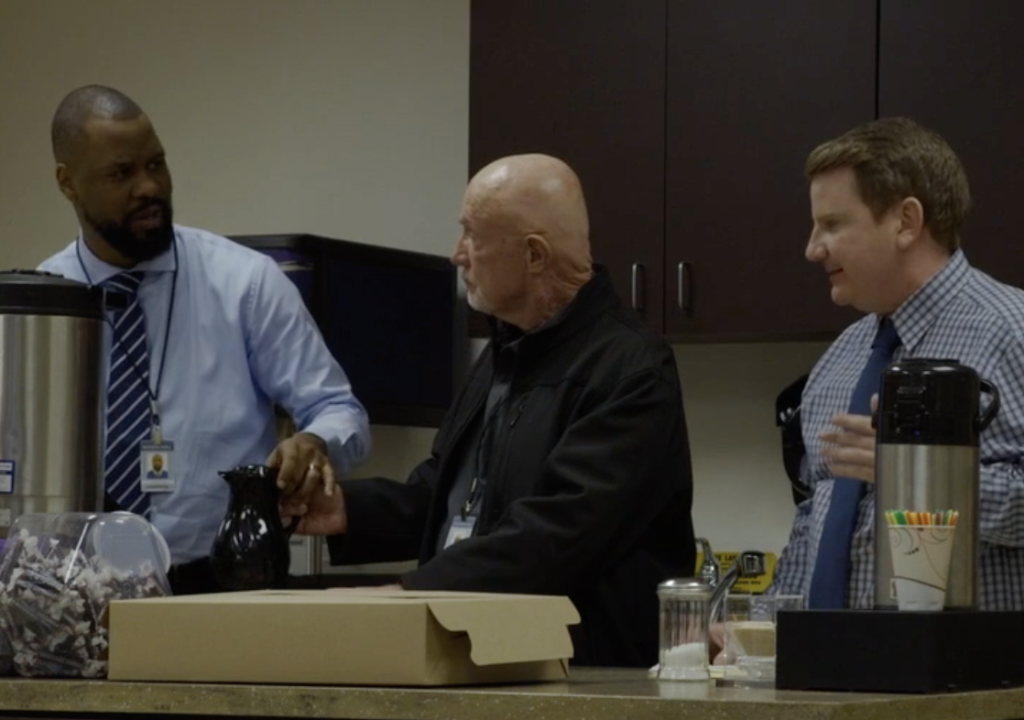 “If he hits you,” replies his co-worker, played by Brendan Jennings. “Bruce Lee, he knows the anatomy. He’s got the moves. He’s gonna find an opening!”

“Without power though, the opening doesn’t mean squat. How much does he weigh? … Ali was the heavyweight champ. He’s got at least a hundred pounds on Lee.”

All of these are great points. We’ll address them below.

Ali Was Much Bigger

“I think it was John Saxon who asked Bruce if he could beat Ali, and Bruce laughed, “Have you seen the size of his fists? They are bigger than my head.” The story might be apocryphal as it indicates a self-deprecating sense of humor which was not Bruce’s forte. That’s why I didn’t include it in my book. But you can throw it with that caveat,” Polly told us.

But Polly is a man of honor. So he suggested we also contact Ali’s biographer, Jonathan Eig, author of “Muhammad Ali: A Life,” which you can check out here.

“Street fight? No rules? Ali kills him. Ali’s twice the size of Lee,” he said.

That might seem to end the debate. Until you consider the problem of Kareem Abdul-Jabbar.

The author, actor, activist and basketball legend is 7’2” — nearly a foot taller than Ali. Over his basketball career, he weighed in at between 225 and 265.

He fought Lee on-screen in “Game of Death,” using his superior reach (see below) to tremendous advantage until Lee’s character discovered and exploited the only apparent weakness of Abdul-Jabar’s character. (Just watch it.)

Could Lee have beaten the real Abdul-Jabar? Lee thought it might be possible. And he was in a good position to know, because he was Abdul-Jabbar’s martial arts teacher.

“Bruce did spar with Kareem Abdul Jabbar and his comment was, ‘His arms and legs are so long I couldn’t get inside to strike him. In a real fight, I would have to take out his knees first,'” Polly explained. “Based on that, I think that would be his strategy against Ali, who while not as huge as Kareem, was still almost twice as big as Bruce. Bruce would use low kicks to try to cripple Ali before Ali could land one of those skull-sized fists on Bruce’s face. Whether or not Bruce could accomplish that is anybody’s guess. I’ve lost a lot of money betting on fights with a great deal more information about the match-up than Lee v. Ali.”

Also, remember the first question we asked — the question first asked by one of the Madrigal employees and then by Eig.

Would this be a street fight?

Bruce Lee Was a Street Fighter

The no-rules format might work to Lee’s advantage. The fight style Lee practiced, jeet kune do, was built around the idea of constantly adapting. It evolved from Lee’ youth spent as an inveterate street fighter.

Ali, however, was a peaceful man outside the ring. He lost several years when he could have boxed in the late 1960s and early ’70s — years when Lee was becoming famous — because he was ensnared in a legal fight with the U.S. government over his refusal to be drafted to kill the Northern Vietnamese.

“He was not confrontational as a kid. He didn’t get into scraps on the street,” Eig noted.

That peaceful nature might not have served Ali well against Lee. The master of jeet kune do would have exploited every possible advantage.

“I’m certain Bruce, who was obsessed with Ali, spent a lot of time thinking about how he could beat the champ in a fight,” he said.

But Again, Ali Was Much Bigger

We keep coming back to the same incredible advantage Ali held over Lee. Lee was famous for chain-punches, a series of quick, devastating strikes, delivered in close quarters. But to again quote Madrigal Employee #1: “Without power though, the opening doesn’t mean squat. How much does he weigh? … Ali was the heavyweight champ. He’s got at least a hundred pounds on Lee.”

Well: At Lee’s peak weight, and Ali’s lowest, Ali only had 65 pounds on Ali. But still.

“He’s so big and so strong,” said Eig. “In boxing, at least, if you’re a lighter weight class you can’t beat a heavyweight. Ali took punches from the biggest, strongest men on the planet –Sonny Liston and George Foreman and Earnie Shavers. I don’t see how those punches from Bruce Lee are gonna stop him.”

But Wait: Why Would They Fight?

It’s often said that a fight’s real winner is the one who walks away from it.

Lee, as Polly’s book recounts, passed up several challenges from cab drivers, drunks in bars, and people on the street who wanted to test their skills against his — but he had no reason to fight them. Ali didn’t look for trouble, either.

“It’s hard to imagine them having reason to fight,” said Eig.

No disrespect to Mike, but he’s no Bruce Lee or Muhammad Ali, and while you were distracted over a debate that Lee and Ali could have easily settled, if they’d chosen to do so, during their remarkable lifetimes, good old Mr. Ehrmantraut exploited your weaknesses with the efficiency of Bruce Lee punching windows in “Game of Death.”

Get it together, guys.