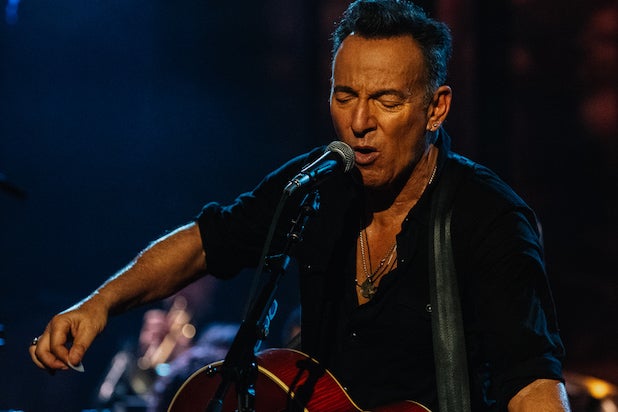 The studio will release the film in theaters later this fall following its world premiere at a gala presentation at the Toronto International Film Festival in September. Fans can also get a first look at the film ahead of screenings of New Line’s “Blinded by the Light.”

Springsteen co-directs the film with his longtime music video and concert film collaborator Thom Zimny. “Western Stars” features Springsteen, a live orchestra and full band performing live takes on all 13 tracks of his 2019 album of the same name, along with additional archival footage and Springsteen’s narration. The concert takes place underneath the cathedral ceiling of a 100-year-old barn.

“Bruce lives in the super rarified air of artists who have blazed new and important trails deep into their careers,” Emmerich said in a statement. “With ‘Western Stars,’ Bruce is pivoting yet again, taking us with him on an emotional and introspective cinematic journey, looking back and looking ahead.  As one of his many fans for over 40 years, I couldn’t be happier to be a rider on this train with Bruce and Thom.”

Springsteen first dropped news of the documentary on SiriusXM’s E Street Radio back in July, saying that the decision to package the album along with the film would be done in lieu of a larger concert tour.

“Western Stars” is Springsteen’s 19th studio album and his first of completely new material since 2009’s “Working on a Dream.” The more acoustic, cinematic sounding album, featuring singles like “Hello Sunshine” and “There Goes My Miracle,” earned Springsteen some of the best reviews in recent years, and the album debuted at #2 on the Billboard 200 behind Madonna’s “Madame X.”

The live performance of “Western Stars” as shown in the documentary features a special appearance by Springsteen’s wife and E Street Band member Patti Scialfa. Springsteen is an executive producer, with  Zimny, Jon Landau, Barbara Carr and George Travis producing.

On Friday, Warner Bros.’s New Line label released “Blinded by the Light,” a Sundance film that was inspired by Springsteen’s music and even features an old, unused song that he previously wrote for a “Harry Potter” film.

Zimny and Springsteen previously collaborated on the documentary “The Promise: The Making of Darkness on the Edge of Town,” and the Netflix filmed version of the Tony Award-winning “Springsteen on Broadway,” which Zimny directed.

Variety first reported the news of the acquisition.