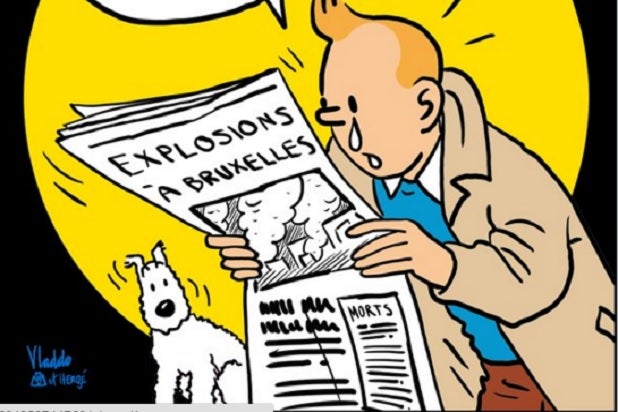 In the wake of deadly bombings that have shaken the city of Brussels to its core, residents are turning to a familiar face for comfort.

Tintin, the popular comic book character, has long been a national treasure of Belgium since he was created by Belgian cartoonist Georges Remi nearly 90 years ago working under the pen name Hergé.

Now, people are sharing images of the boyish blond reporter Tintin, his friend Captain Haddock, and Tintin’s dog, Snowy, to show solidarity with the city.

In one of the images circulating today, Tintin cries tears of red, yellow, and black, the colors of the Belgian flag. In another, he reads a newspaper with news of the attack on the front page in horror while Snowy looks on.

The attacks in Brussels come just days after the capture of suspected Paris terror attack perpetrator Salah Abdeslam. Abdeslam was captured during a raid on a Brussels apartment that left another suspect dead.

Check out some more of the comics below.