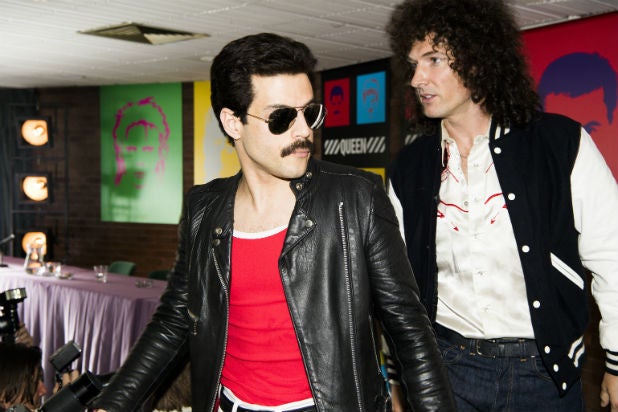 Writer and producer Bryan Fuller is accusing 20th Century Fox of “hetero-washing” the story of Queen frontman Freddie Mercury in a new trailer and marketing materials for the biopic “Bohemian Rhapsody.”

“Anyone else mildly annoyed … that the #BohemianRhapsody trailer features gay/bi superstar Freddie Mercury flirting with and twirling with a woman but no indication of his love of men?” Fuller tweeted on Tuesday after the clip hit the web.

The footage shows actress Lucy Boynton staring longingly at star Rami Malek as Mercury, also leaping into his arms. Boynton plays Mary Austin, who some credit as Mercury’s muse but is not well known in pop culture. The trailer also features a young man coming on to Malek’s Mercury in a recording studio, but it’s blink-and-miss.

Fuller directly addressed the studio in a separate tweet, incredulous over their choice of words to describe Mercury’s battle with AIDS. The singer died of an AIDS-related illness in 1991.

“Dear 20th Century Fox .. Yes, it was a life-threatening illness, but more specifically it was AIDS. From having gay sex with men. Do better,” he wrote, with a screenshot of the film’s official synopsis.

That description said Mercury faced “a life-threatening illness.” Representatives for 20th Century Fox  Film did not immediately have a comment.

With his tweet, Fuller added the hashtag #HetWashing, which presumably translated to “heterosexual washing.” It’s a term reserved for content that has been changed from its source material to be more palatable for wide audiences, and is often seen in a racial context when characters of color are replaced by white actors.

“Rhapsody” has had a tumultuous road to the screen, in and out of development with different stars attached for years. The production was also hit with scandal when the studio made the rare move of firing director Bryan Singer more than halfway through shooting. He was replaced by Dexter Fletcher.

Fuller is the creator of the NBC cult hit “Hannibal,” and brought the STARZ hit “American Gods” to screen. He was also the showrunner on “Star Trek: Discovery,” before stepping down last November.

“Bohemian Rhapsody” is set to hit theaters on November 2.

ANYONE ELSE MILDLY ANNOYED (enough to tweet about it) THAT THE #BohemianRapsody TRAILER FEATURES GAY/BI SUPERSTAR FREDDIE MERCURY FLIRTING WITH AND TWIRLING WITH A WOMAN BUT NO INDICATION OF HIS LOVE OF MEN?

DEAR 20TH CENTURY FOX… Yes, it was a life-threatening illness, but more specifically it was AIDS. From having gay sex with men. Do better. #HETWASHING #BohemianRapsody pic.twitter.com/sz8QJU7cCA