Mid-spring marks the time of year when at-risk shows must sweat out their fates — sometimes right up until networks announce their fall schedules to advertisers at their upfront presentations in May. Optimism has its place in Hollywood, but it ranks somewhere between actual advertising money and the feel-good awards that can sometimes keep low-rated shows alive.

TheWrap is here to help make sense of it all, charting below what scripted series have already been renewed on each of the English-language broadcast networks, what’s been canceled or just ended, and which way each of the many remaining decisions will likely lean.

NBC
Every network has to cancel some shows to make way for promising pilots — even the highest-rated broadcaster. And NBC has already made many decisions about what’s coming back and what’s not, though there are a few programs still left in limbo, and not all of them will live to see another season.

The only bubble show we know for certain is truly safe is “This Is Us,” NBC’s highest-rated series and the highest-rated scripted show on TV. Individuals with knowledge of the hold up here tell TheWrap the delay in renewing the Dan Fogelman-created family drama is due to negotiations regarding a multi-season pickup. So don’t worry, the Pearson clan is coming back and probably going to be with you for years to come.

The other two “maybes” that are more likely a “yes” than a “no” are — in order — freshman spy drama “The Enemy Within” and the Glenn Howerton-led comedy “A.P. Bio” (now in its second season), both of which premiered at midseason. “Enemy Within” performs well enough in its time slot to warrant another batch of episodes and the names behind “A.P. Bio” (Howerton, Seth Meyers and “SNL” boss Lorne Michaels) will probably keep that show going for at least one more year. The argument against “Bio” can be made easily by our ratings chart below.

NBC’s ax is coming for low-rated multi-cam “Abby’s” and fellow new comedy “I Feel Bad,” which wrapped in December with no back-half order for its first season. Likely to end here are freshman drama “The Village,” a midseason show that has seen a few time-slot shuffles since its debut, and “Blindspot,” which was pulled from NBC’s schedule ahead of May sweeps. 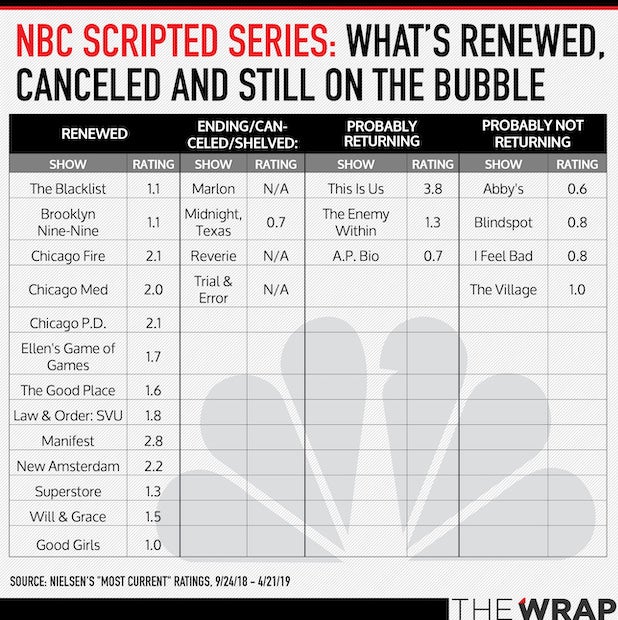 We coded “Marlon,” “Reverie” and “Trial & Error” with “N/A” ratings above as they were not part of the ongoing TV season, but for those who want to know they averaged a 0.8, 0.6 and 0.7, respectively.

ABC
ABC has already renewed a few of its prized possessions, including “The Conners,” “The Good Doctor,” and “Modern Family” (for an 11th and final season) and promising freshman drama “A Million Little Things,” along with giving another summer (2020) for “Marvel’s Agents of S.H.I.E.L.D.” But because the broadcast network has canceled just one show so far (“Take Two,” a summer drama that was let go last November) it’s got a long ways to go if it wants to clear the deck ahead of upfronts.

When it comes to shows that will make it through the bloodbath ABC normally pulls the Friday before its presentation to advertisers in May, the network will surely hold on to Shonda Rhimes’ “Grey’s Anatomy” and probably “How to Get Away With Murder,” and will most likely be giving a second season to Nathan Fillion’s cop drama “The Rookie” and the Scott Foley/Lauren Cohan-led “Whiskey Cavalier.” It’s truly too early to make a call on Lake Bell sitcom “Bless This Mess,” so we’re giving it the benefit of the doubt below — after all, comedies are harder to come by and its debut was solid.

Other series you can count on sticking around are sitcoms “The Goldbergs,” “Black-ish,” “Schooled,” “American Housewife,” “Fresh Off the Boat,” and (probably) “Splitting Up Together.”

But chances are we can say goodbye to the “Grey’s Anatomy” spinoff, “Station 19,” which recently lost its showrunner; first-year comedy “Single Parents”; the Marcia Clark-inspired “The Fix”; Shondaland legal drama “For the People”; and comedies “The Kids Are Alright” — a newbie that hasn’t resonated — and “Speechless.” Though critics adore “Speechless,” a move to Friday and the plot seeing J.J. headed off to college makes it more likely that ABC will pair something new with “FOTB.” 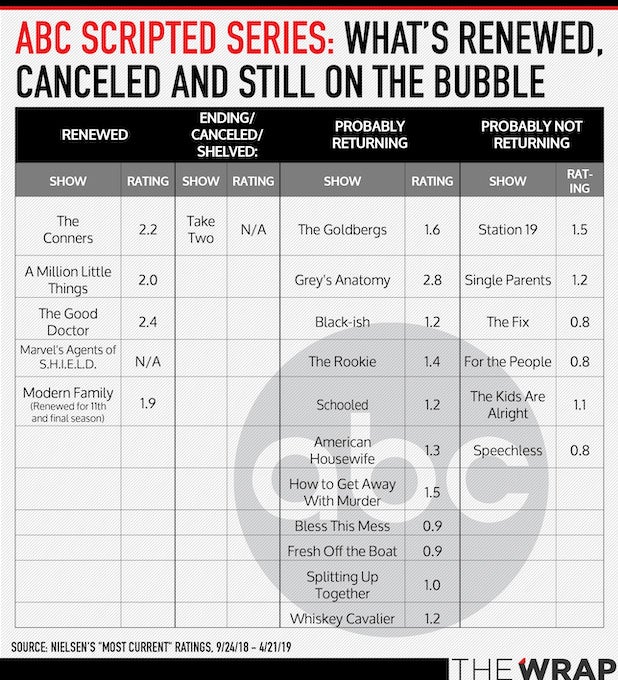 We coded “SHIELD” and “Take Two” with “N/A” ratings above as they were not part of the ongoing TV season, but for those who want to know they averaged a 1.2 and 0.6, respectively.

Also Read: 19 New Midseason TV Shows Ranked by Premiere Viewers: From 'Bless This Mess' to 'In the Dark' (Photos)

Fox
Fox already got a bunch of no-brainer renewals out of the way, and this was always going to be “Gotham’s” farewell season — the now-independent broadcaster has got to make more cuts than just the recently canceled “Rel” and “The Gifted” if it’s gonna have room for a few new shows next fall. (Don’t forget: Fox will start airing WWE’s “SmackDown Live” on Fridays beginning in October, giving the network one less night for scripted fare.)

Though the Jussie Smollett situation has made the conversation surrounding “Empire’s” renewal (with or without Smollett) tumultuous, its ratings practically guarantee the hip-hop drama will return. By the way, we’ll probably hear about “Empire’s” fate before Smollett’s — he’s under contract until the end of June, a person with knowledge of cast deals has told TheWrap. Chances are “Star,” another Lee Daniel-created series and “Empire’s” current lead-out program, is safe alongside it.

Seth MacFarlane’s “The Orville” is sure to beam up a third season and the Mark Paul Gosselaar-led vampire drama, “The Passage,” will likely see a second.

Unfortunately, if you are a fan of the midseason legal drama “Proven Innocent,” the off-screen-conflicts-plagued action series “Lethal Weapon,” or first-year comedy “The Cool Kids,” you should prepare for their inevitable cancellations. 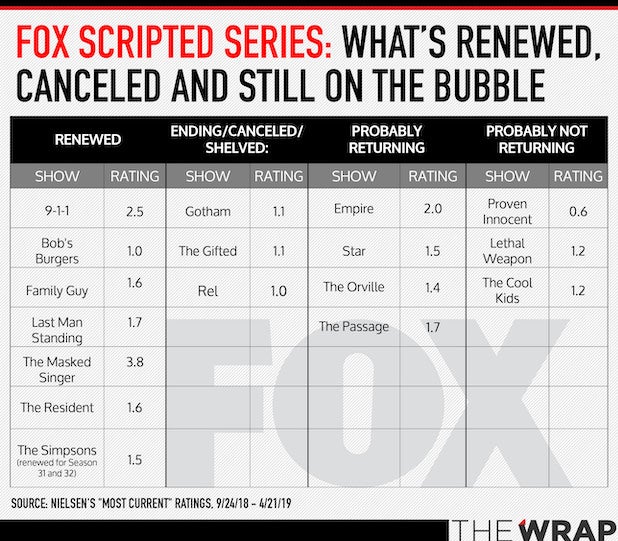 CBS
CBS has already renewed 11 of its current series, including “Criminal Minds” (for a 15th and final season) and comedies “Mom” and “Young Sheldon,” which got picked up for two more years apiece.

However, the broadcast network still has over a dozen decisions left to make, seeing as only three shows have landed in CBS’ canceled/ending category ahead of the reveal of its 2019-20 slate: long-running ratings star “The Big Bang Theory” and the Jonny Lee Miller and Lucy Liu-led drama “Elementary,” both of which are coming to a planned end this season, and “Salvation,” a summer drama that was axed last fall.

Looking at the 13 bubble series holding out hope at CBS, you can put good money on the dramas “Bull,” “Hawaii Five-0,” “SEAL Team,” “S.W.A.T.,” and “MacGyver” all making a comeback, as well as the sitcoms “Man With a Plan” and “Life in Pieces.” It’s admittedly a bit early to make a call on “Life in Pieces,” but the coin-flip came up heads — returning — for us.

There doesn’t seem to be any justification to continuing the “Murphy Brown” revival, which was wisely billed as a one-time thing from the beginning. Freshman comedies “Happy Together” and “Fam,” and dramas “Ransom,” “Madam Secretary,” and “The Code” can’t really make enough of a case to come back either. 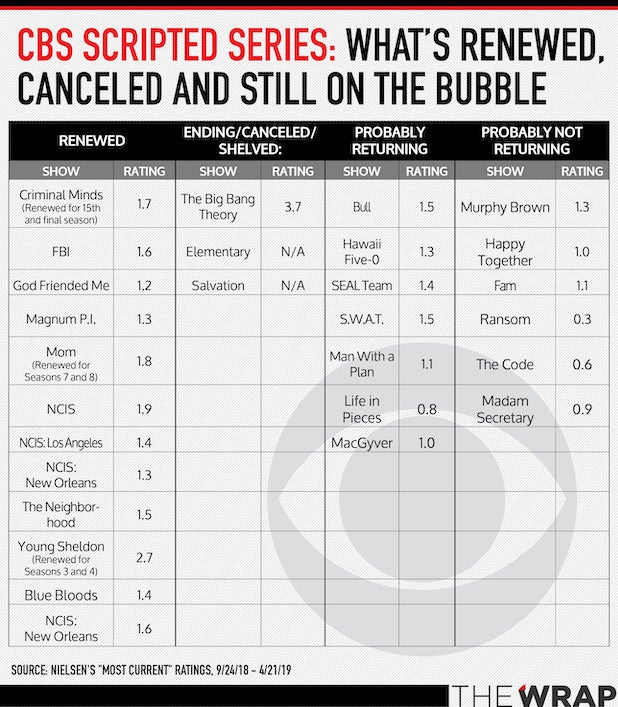 We coded “Elementary” and “Salvation” with “N/A” ratings above as they were not part of the ongoing TV season, but for those who want to know they averaged a 0.9 and 0.5, respectively.

The CW
No bubble shows here! The younger-skewing network has already renewed all of its series (new and old) for another season, with the exceptions of “Jane the Virgin,” “Crazy Ex-Girlfriend” and “iZombie,” all three of which are airing their series finales this year. While there are no programs in limbo at The CW, there are still pilot decisions to be made, as the broadcaster returned to programming six nights a week in 2018.