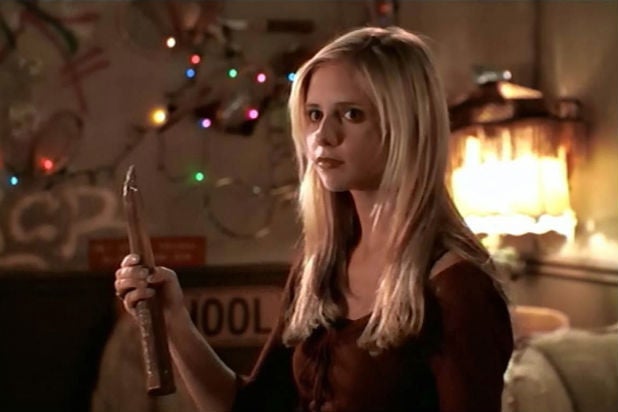 “Buffy the Vampire Slayer” premiered 20 years ago today, and the show’s cast, writers and fans are paying tribute to the groundbreaking series on Twitter.

“Buffy” fans shared what the show meant to them 20 years ago using the hashtag #BuffySlays20, which became a trending topic on Twitter on Friday. Users shared memories, fan art and gratitude for the show, reflecting on how influential the WB series was at the time, and still is today.

“Before Hermione Granger and Daenerys Targaryen, there was Buffy Summers and she set the bar for strong female characters,” wrote one Twitter user.

Star Sarah Michelle Gellar got in on the action, using the hashtag to thank her fans and share some of her favorite memories. The actress, who earned a Golden Globe nomination for her work on the show, also penned a longer tribute to “Buffy” on Instagram.

“She’s a feminist challenge to gender hierarchy,” she wrote. “Buffy may have been the Chosen One, but I was the lucky one.”

#buffyslays20 To the greatest fans ever, thank you for keeping this show going long past our seven seasons pic.twitter.com/xRMxk1HD61

Wow. #20YearsOfBuffy @joss What can I possibly say to thank you? No really, what can I say?!? I need YOU to write it!!!

@joss sending you a huge thank you and an awkward hug for hiring me all those years ago. #buffyslays20 #BuffyTheVampireSlayer

#Buffy #Angel epic romance. an honor to be a part of. #buffyslays20 #BuffyTheVampireSlayer #Undead #Julietlandauhttps://t.co/E5z8MXsVke pic.twitter.com/Po9rMBSuqS

20yrs ago @joss gave me a chance to be a small part of something big! I'm eternally grateful! #buffyslays20 pic.twitter.com/iio0pZMNT2

#Buffy changed the world – and it changed me. (And I have a career because of it.) Thank you, @joss. ????#buffyslays20 pic.twitter.com/ajnFqMFGaa

Sending so much love to all Buffy fans on our 20th anniversary! Thank you for remembering!

Before Hermione Granger and Daenerys Targaryen, there was Buffy Summers and she set the bar for strong female characters! #buffyslays20 pic.twitter.com/j6dLPRCOsr

.@SarahMGellar: "20 years ago today, I had the greatest privilege to bring Buffy to your tv screens for the first time.” #buffyslays20 pic.twitter.com/HBKHRo96pZ

Willow & Tara were the first LGBT+ characters I saw on TV. I can't believe it's been 20 years since this show first aired ❤️ #BuffySlays20 pic.twitter.com/EXmAnlVuMn

#BuffyTheVampireSlayer was my #1 formative influence and inspiration and it's still my all-time favourite. happy buffy day! #buffyslays20 pic.twitter.com/WO7JIXyGAs

20 years since the Greatest Television Show Of All Time. The Greatest. Ever. #buffyslays20

@SarahMGellar Thank you for making such an entertaining show that means so much to us fans 20 years on! Long live Buffy! #buffyslays20

The first tv couple I ever shipped was Buffy & Angel! I wanted them to end up together so badly! ☺️ #BuffyTheVampireSlayer #buffyslays20 pic.twitter.com/O31ZOhJJqw

It's super liberating to have something joyful, but also so full of badass lady power to tweet about #buffyslays20

Thank you BTVS for Willow and Tara; strong and complex women in love #buffy20gifparty #buffyslays20 pic.twitter.com/GUWQSTCqYT