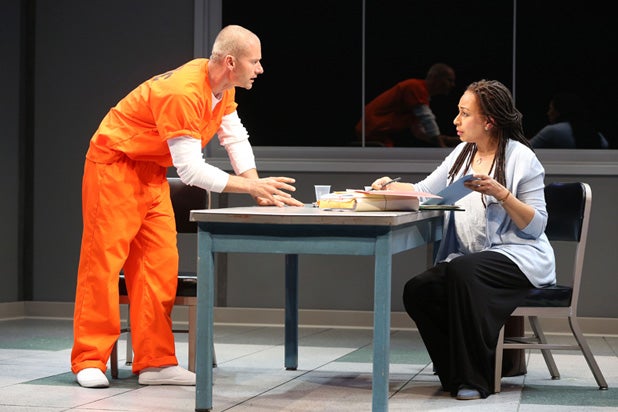 Robert Schenkkan, best known for his LBJ bioplay “All the Way,” takes on another president in his latest, “Building the Wall,” which opened Wednesday at Off Broadway’s New World Stages. Yes, it’s Donald Trump time again in the theater, but preaching to the chorus here involves much more than a few oblique reference to the aggrieved white masses, political incompetence and modern-day fascism.

Schenkkan sets “Building the Wall” in a post-Trump America where the president has been removed from office and one of his most ardent supporters remains behind bars, convicted of grievous crimes.

“Building the Wall” is powerful in its preposterousness. Just when you think the revelations can’t get any darker, they turn another, deeper shade of black. Without your being told more, it is probably best to go into Schenkkan’s two-hander drama knowing that it ends in a nightmare that is more social than political.

Otherwise, the play’s first few moments can seem like a rehash of an MSNBC special on “Whatever Happened to the Trump Voter?” Schenkkan’s righteous college professor, Gloria (Tamara Tunie), interviews the convict Rick (James Badge Dale) in prison. She’s liberal, he’s conservative. And need we hear more about the end of the American dream for the white worker who’s holding down two, three jobs just to stay off food stamps while illegal aliens take the good jobs and get food stamps from a government that’s not theirs?

Rest assured. Schenkkan doesn’t stay on that subject for long before Rick begins to detail his security job in a center for the mass deportation of non-citizens. His talk about sanitation is especially riveting, and Dale carefully begins to build sympathy for his put-upon character.

In the beginning, he resembles James Carville, only conservative and angrier. But slowly, we begin to see a tinge of Kafka in Rick’s work as he tries to do his best when the courts, the police, his corporate bosses and elected officials fail to heed his increasingly urgent warnings.

What doesn’t happen in “Building the Wall” is that Gloria never changes. She remains the sympathetic, dogged journalist out to write a good story. In other words, she’s a prop put there to ask Rick questions. In a better, even more disturbing play — and “Building the Wall” is very disturbing as is — she might also be shown to bear some responsibility for what went wrong in America.

Maybe she succumbed to the Susan Sarandon Syndrome of purist left-wing politics. Or she joined the Too Cool to Vote college students. Under Ari Edelson’s direction, Tunie compensates by projecting a grand image, one that never recedes in this drama even though she’s on stage for all 90 minutes with a guy who’s both victim and monster. Dale rivets in his evolution and manipulation of Rick’s many faces. It’s a performance unlike any other on stage right now in New York City.

“Building the Wall” doesn’t have much to say about The Wall. It only comes up in the play’s final moments, but what Schenkkan puts in Rick’s mouth is unforgettable.