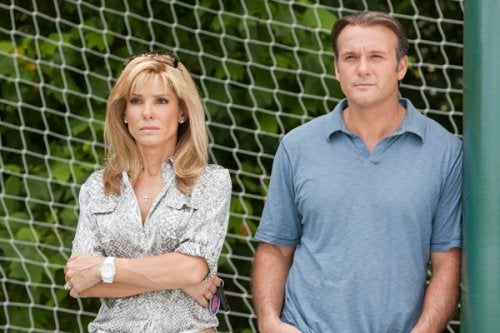 Her personal life may be in tatters, but Sandra Bullock’s career is still going strong.

America’s movie sweetheart topped the movie rental charts with her football drama, "The Blind Side," according to both Home Media Magazine and Rentrak. The two video tracking services differed on who the week’s top selling DVD was however. Home Media Magazine claims "The Blind Side" nabbed first place with 3 million copies sold, while Rentrak says the "The Twilight Saga: New Moon" held onto the top spot for the second week after selling $4 million units in its first weekend. Both films were among last year’s biggest hits — "New Moon" grossed $707 million and "The Blind Side" made $277 million and counting.

Just as they dominated the box office last fall, Bullock’s heart-tugger and the vampire romance carved up the lion’s share of DVD and Blu-ray sales and rentals, leaving the rest of the spoils to a series of also-rans and holdovers.

Another new release, George Clooney’s army comedy "The Men Who Stare at Goats" came in second on the rental charts, with "New Moon" grabbing the third slot, according to Rentrak. Rounding out the top five were the disaster movie "2012," still going strong in its fourth week of release, and the Tobey Maguire war drama "Brothers," which debuted at number five on the rental chart. Neither "Goats" nor "Brothers" performed particularly well at the box office, earning $63.2 million and $39 million respectively, despite their strong bows on the rental charts.

Bestselling DVDs for the week include Disney’s "The Princess and the Frog" (number three), "The Men Who Stare at Goats" (number four), and "Brothers" (number five). Although Wes Anderson’s stop motion adaptation of Roald Dahl’s children’s classic, "The Fantastic Mr. Fox" failed to crack Rentrak’s top ten list of movie rentals, it did hit number seven on the company’s sale’s chart.

Bullock’s reign may be short lived. The competition will intensify next week when both "Sherlock Holmes" and "Alvin & the Chipmunks: The Squeakquel" hit DVD and Blu-ray.