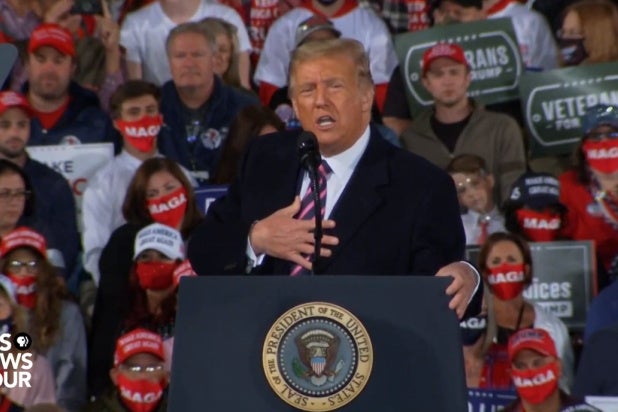 Donald Trump has been holding almost daily rallies in which he inevitably says something or other that causes a furor online. And on Tuesday, in Moon Township, Pa., the big one was probably his strange comment about tuna.

“Cans of tuna fish. They go out and buy tuna fish and soup. You know that, right?” Trump declared, before saying something incomprehensible about Goya brand foods, which Trump has been actively promoting. “They throw it. It’s the perfect weight, tuna fish, they can really rip it, right? And that hits you. No, it’s true. Bumble Bee brand tuna. And you can throw that [unintelligible], you can put a curve on it, you can do whatever the hell you want.”

Trump then complained about how the police in Chicago aren’t allowed to fight back against the alleged tuna-wielding protesters.

You can watch the video of Trump’s tuna rant below.

Trump on protesters at PA rally: “They go out and buy tuna fish and soup…they throw it. It’s the perfect weight, tuna fish, they can really rip it…And that hits you…Bumble Bee brand tuna…and [the cops] are not allowed to fight back…”

The folks at Bumble Bee, which is one of the leading tuna brands in the world, were no doubt confused about Trump calling them out like that, but their social media team managed to put together a brief humorous response on Twitter to this strange comment from the president: “Eat em. Don’t throw em.”

Palmer Report has a theory about why Trump went out of his way to specifically call out Bumble Bee tuna: Bumble Bee was opposed to Trump’s big tariff increase in 2018, while their chief competitor, StarKist, was in favor of the tariffs.

The tuna thing wasn’t the only wild comment Trump made at his rally on Tuesday. He also relished the memory of MSNBC reporter Ali Velshi being shot with a rubber bullet by police in Minneapolis in May, calling it a “beautiful sight.” Though he couldn’t remember what network Velshi worked for.

“The street was a mess. That idiot reporter from CNN got hit on the knee with a canister of tear gas. and he went down,” Trump said, before referring to Velshi as “the one with the shaved head.”

This was the second time in less than a week that Trump made comments like this about Velshi being brutalized by police — the previous time was last Friday in Bemidji, Min.