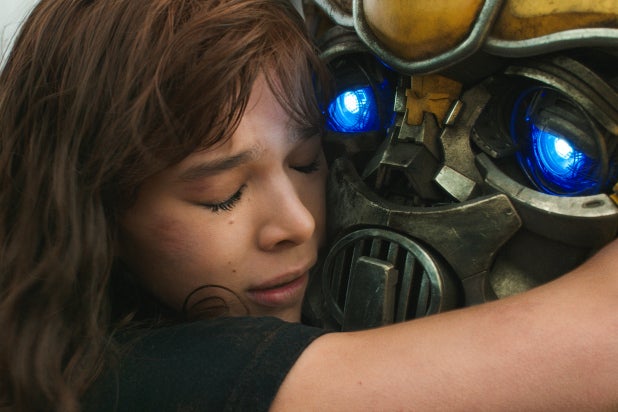 It’s been 11 years since Michael Bay took the reins of the live-action “Transformers” movies, and in that time he has infused these films with a particular, cacophonous audio-visual aesthetic that has more in common with a roller coaster at a rave in a war zone than what we would otherwise consider conventional, cinematic storytelling. His approach has its fans, but with “Bumblebee,” we can finally see what a filmmaker other than Michael Bay could do with the concept of alien machines that transform into stuff.

And it turns out they could do wonders.

“Bumblebee,” directed by Travis Knight (“Kubo and the Two Strings”), is the best “Transformers” movie so far, going all the way back to the 1986 animated film. And although one could argue that that’s a relatively low bar, since narrative coherence and recognizable character development are all it really takes to best its predecessors, saying so is more than merely damning “Bumblebee” with faint praise. This really is a sound, satisfying, enjoyable action movie for the whole family.

“Bumblebee” kicks off on the planet Cybertron, a massive technological wonder where a civilization of sentient robots is in the middle of a brutal civil war. Optimus Prime (voiced, as always, by Peter Cullen) signals a hasty retreat for his Autobot resistance and commands his soldier B-127 (voiced by Dylan O’Brien) to flee to Earth to prepare the planet to become the Autobots’ new base of operations.

B-127 lands in the middle of a military exercise, led by Agent Jack Burns (John Cena), which immediately turns into a robot hunt, as the poor alien races through the forest, desperately trying to evade capture. And just when it seems like he might be able to reason with these humans, a Decepticon called Blitzwing arrives, blows everyone to hell, rips out B-127’s voice box, and leaves our hero broken, his memory erased, and impersonating a beat-up Volkswagen Beetle as a defense mechanism.

In a storyline straight out of a “Herbie” sequel, B-127 gets purchased by teenage amateur mechanic Charlie Watson (Hailee Steinfeld), who’s still mourning the death of her father, even though her mother has remarried and her little brother has clearly moved on. So a giant robot that can also transform into a convenient compact car immediately becomes her new best friend. She renames him “Bumblebee,” they bond, they get into comic misadventures, she begins a mildly romantic friendship with her neighbor Memo (Jorge Lendeborg Jr., “Love, Simon”), and eventually they all run from two more Decepticons who have arrived on Earth with evil intentions.

Unlike Bay’s “Transformers” films, which were steeped in nostalgia for 1980s products but filmed with a 21st century blockbuster aesthetic, “Bumblebee” is a 1980s genre film through-and-through. The screenplay by Christina Hodson (“Unforgettable”) embraces the familiar structure of every classic “magical friend” movie, from “E.T.” all the way to “Mac & Me,” and leaves it up to Knight, his cast and his VFX team to make the film feel new and distinctive.

Challenge accepted: “Bumblebee” plays like a loving throwback, with genuine and funny performances, and direction that finally makes the Transformers characters feel real. The overwhelming and distracting detail from the previous films has been stripped away, leaving Bumblebee, Optimus Prime, and the villains Shatter (Angela Bassett) and Dropkick (Justin Theroux) with an aesthetically pleasing design that highlights the performance of the characters.

These Transformers demonstrate complex human emotions, from fear to elation to shame to fury, and the attention paid to making them behave like recognizable creatures makes even conventional comic set pieces play better than they sound. The inevitable scene where Bumblebee is all alone in Charlie’s house, accidentally making an enormous mess and then making it even messier by trying to stop, is a whimsical highlight because he genuinely looks distressed. It also works because Knight films the sequence like a silent-comedy routine, whereas Bay previously treated a similar scene in the first “Transformers” as though it were a cinematic panic attack.

“Bumblebee” is such a massive stylistic and tonal shift for the “Transformers” franchise that it’s incredibly hard to even discuss it without resorting to comparison. If “Bumblebee” were the very first entry in this live-action franchise, it might seem small and derivative of 1980s kids films. But as a course correction for the series, pulling the previously complex mythology way back and starting over from scratch, it’s enormously effective.

Knight’s do-over reminds us why a whole generation loved “Transformers” in the first place. Yes, they were cool toys, but they were toys with built-in personalities. We didn’t want to own a Transformer; we wanted to team up with them, to be part of their secret world where machines have lives of their own and get into fantastic adventures. To that end, Steinfeld grounds “Bumblebee” beautifully, with a rich and specific performance that never once treats the bizarre sci-fi events with ironic detachment or cynicism. It’s her world, and now there are robots in it, and she adapts accordingly.

And, of course, the action kicks butt. Knight seems keenly aware that most of the middle of his film will be a lengthy family flick about a teenager hanging out with her car, so he front-loads his movie with gigantic set pieces. The war on Cybertron is huge, yet coherent. Knight and his VFX team animate the battle in extended shots that focus on a single character, giving fan-favorite Transformers like Optimus an opportunity to shine right alongside robots with very little screen time, like Soundwave.

Of course, the action picks up again for the big climax, when the whole world is at stake and all the robots are fighting each other and some alien widgets have to be pried out of other widgets. But we always know exactly what’s happening and why it matters, because the film is skillfully constructed and edited with a modicum of restraint.

“Bumblebee” is, again and easily, the best “Transformers” movie. Heck, it’s probably the only genuinely good “Transformers” movie, with nary a caveat to be found. But it’s also a lively and earnest 1980s nostalgia trip, made with affection for the era and its characters and its soundtracks and its storytelling styles and, yes, even its toys. If this is where the new “Transformers” franchise is headed, then let the transformation continue.