“Buried Child” won the Pulitzer Prize in 1979 and became Sam Shepard‘s first widely produced play. Before Shepard came along, no one had thought to combine the absurdism of Edward Albee with the earthiness of “Tobacco Road.” Shepard never quite re-created the magic of his first big success, as the recent Broadway revival of his “True West” showed. His sure talent for creating monologues that actors love to chew scenery with overtook his less-secure sense of dramatic structure.

In the New Group’s revival of “Buried Child,” which opened Wednesday at Off Broadway’s Pershing Square Signature Center, Shepard’s gift for language is captured in the play’s opening scene with the pitch-perfect performances of its two lead actors.

Amy Madigan’s Halie is out of sight upstairs yelling down to her husband, Dodge, played by Ed Harris, who sits on the couch watching TV, coughing, and drinking whiskey. She’s badgering him to take care of his health, which is clearly shot, amid reminiscences of a dead son, whom she has idealized beyond recognition. When Halie finally appears, she is dressed for church and complaining about the Catholic woman she blames for the murder of that child, a man who could have been the American Dream. He’s just that, his mother’s dream.

Clearly Halie’s other two sons are a deep disappointment to her: the mentally feeble Tilden (Paul Sparks) and the brutish amputee Bradley (Rich Sommer), who has a penchant for shaving his father’s head and leaving ugly scabs behind on his scalp. 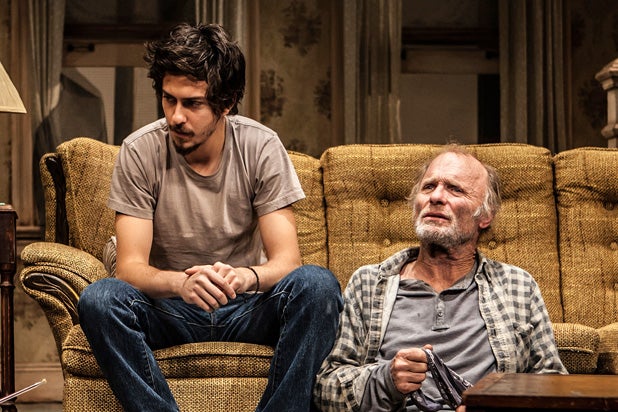 If Shepard were a woman, “Buried Child” would be called the work of a misandrist. His plays never have much good to say about men, and this is one of his bleaker exposés of the male condition.

While Halie is away at church having an affair with the local minister (Larry Pine), her grandson, Vince (Nat Wolff of “The Fault in Our Stars”), and his girlfriend, Shelly (Taissa Farmiga of “American Horror Story”), make an unexpected visit after his not having been at the old homestead for six years. They’re on their way to the Southwest to visit his dad, Tilden, whom they don’t know is now living back home and finding all sorts of corn, carrots, and potatoes in the back 40 that hasn’t grown a thing since the Dust Bowl. That miracle green isn’t the only thing pushing the boundaries of absurdity.

When Vince leaves his girlfriend alone with these lunatics so he can buy some hooch for Grandpa, things get dicey for Shelly in a way that Shepard knows how to deliver. Without anyone removing a stitch of clothing, the figurative rape of Shelly is brutal in its speed.

Under Scott Elliott’s otherwise flawless direction, “Buried Child” could use an intermission after Shelly’s violation instead of being performed straight through. The other much larger problem is Farmiga’s performance, which doesn’t make the transition to the play’s second half. Her staccato, perky delivery is irritating when we first meet her. It’s all wrong later, when she’s meant to be seen as a civilizing force, ready to take over from Hailie. 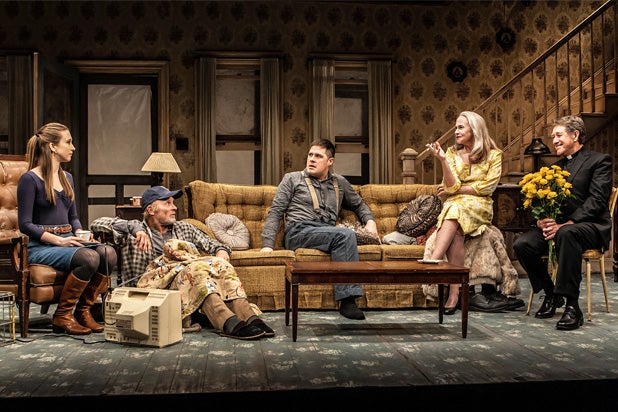 “Buried Child” delivers another Sybil-like character switch when the once-normal Vince returns home from the local liquor mart and suddenly inherits the family’s bad male gene. Wolff makes the leap, but in the shadow of Farmiga’s failed attempt, it’s a real struggle.

One other caveat: Elliott departs from other productions of “Buried Child” by leaving out one major visual detail. We see and hear a lot about corn and carrots. We also need to see the potatoes.