Under most circumstances, studio executives who buy a film based on an obscure comic-book franchise featuring a down-on-his-luck star, as well as 10-year-old characters shooting adults in the face would be in a flop sweat.

But Lionsgate officials are almost giddy in anticipation of the Matthew Vaughn-directed “Kick-Ass,” which enters high-profile screenings next week at ShoWest and South by Southwest — as well as its official premiere on April 16 – with some of the best pre-release movie buzz in recent memory.

It’s easy to see why. One trailer features what appears to be a 10-year-old girl — named "Hit Girl" — draped in a purple wig and wielding a Tarantino-sized revolver as she knocks off scary-looking dudes in one scene after 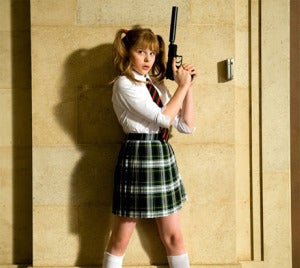 another. In one she actually gets shot in the chest (though doesn’t die).

“We have done a series of word-of-mouth screenings with the Comic-Con demographic around the country, and the response has been terrific,” said Lionsgate vice chairman Michael Burns to TheWrap.

Jason Constantine, president of acquisitions and co-productions for the studio, was even more emphatic: “This movie has played like a rock concert,” he said.

That’s understandable, though it’s also easy to imagine some parents being shocked into protest against the kids-and-violence tone, however comic.

As one excited fan recently noted on a fan site that featured the trailer noted, " I can’t decide what I’m more interested in — seeing the film or the inevitable freakout from special-interest groups."

Pre-release box-office tracking doesn’t yet exist for the film, which is more than a month away from its theatrical release.

But fanboy sites have been raving about it nonstop, with one Ain’t It Cool News reviewer calling his test-screening experience "f***ing awesome!!!"

In fact, "Kick-Ass" generated stronger buzz than any other movie at Ain’t It Cool founder Harry Knowles’ "Butt-Numb-a-Thon" film festival. And Collider.com blogger Adam Goldberg presented the red-band trailer with a tinge of remorse:

“It’s tearing me up inside that I won’t get to see this film until mid-April,” Goldberg writes. “The movie looks like it’s pulsing with so much energy that it’s about to have the world’s most awesome heart attack.”
Meanwhile, back in the real world, several films have vacated “Kick-Ass’” April 16 release date, including Weinstein’s “Piranha 3D,” in search of less competitive waters.
Based on Mark Millar’s “Kick-Ass” comic book series, the film follows the proverbial wimpy-kid high-school student — played by 19-year-old journeykid actor Aaron Johnson — who takes on a costumed superhero identity, despite the fact he doesn’t have the requisite super powers. Headlining is Nicolas Cage, in a role Lionsgate officials insist will restore his career, or at least help clear up some debt.
Besides redemption for Cage — “who hasn’t looked this good in a movie in a long time,” as another Lionsgate official put it — studio officials believe the film is full of breakout performances, most notably that of 13-year-old Chloe Moritz, who plays the character “Hit-Girl,” a conspicuous focal point of the film’s violence.
“Tonally, it’s ‘Superbad’ meets ‘Kill Bill,’" explained Constantine.
Vaughn (“Lock, Stock and Two Smoking Barrels,” “Layer Cake”) cobbled together the $30 million in production financing himself, getting support from a constituency that included Plan B Entertainment, among others.
After Vaughn screened a number of scenes from the unfinished film at Comic-Con last summer, virtually all the majors converged in August for a bidding war.
Lionsgate emerged the winner, paying $15 million for North American distribution rights, as well as the ability to act as the movie’s international sales agent.
“From the very first screening, we absolutely loved it,” Constantine said. “We knew that this was a really extraordinary film.”
Certainly Moritiz’s character plays into that uniqueness — when she’s not shooting people, she’s cutting their limps off with swords.
Constantine, however, said the studio isn’t concerned about any negative publicity issues that could arise from having 10-year-olds shoot people… and get shot themselves.
“Once you see the film, you’ll understand the context of the scenes,” he said. “This is such a specific story and a bold story. You could give this script to 100 different directors, and they would make probably 100 different films. But only one would work tonally the way ‘Kick-Ass’ does.”
(Note: Trailer below is the red-band version — in all its full raunchy glory).
x